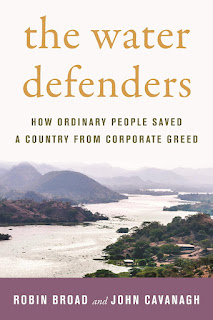 Once in a while, determined activists, with grit and determination, can defeat a multi-national mining corporation.   Water Defenders is a new book with the inside story of the successful (but ongoing) struggle to prevent gold and other metallic mining in El Salvador.

From the book's publisher:

Based on over a decade of research and their own role as international allies of the community groups in El Salvador, Robin Broad and John Cavanagh unspool this untold story—a tale replete with corporate greed, a transnational lawsuit at a secretive World Bank tribunal in Washington, violent threats, murders, and—surprisingly—victory. The husband-and-wife duo immerses the reader in the lives of the Salvadoran villagers, the journeys of the local activists who sought the truth about the effects of gold mining on the environment, and the behind-the-scenes maneuverings of the corporate mining executives and their lawyers. The Water Defenders demands that we examine our assumptions about progress and prosperity, while providing valuable lessons for those fighting against destructive corporations in the United States and across the world.

Central to the fight was the successful defense in an international arbitration before the World Bank in Washington, D.C., when El Salvador was sued by the gold mining company Pacific Rim, later acquired by Oceana Gold.    Seeking hundreds of millions of dollars because successive governments in El Salvador had refused to grant the corporation "exploitation" permits to mine gold under the hills of Cabañas, the mining company forced El Salvador to defend itself in an arbitration forum in Washington.  The Water Defenders provides a behind-the-scenes look at the organization, protests, and strategies which resulted in Oceana Gold defeated and owing El Salvador $8 million.

(The lead lawyer for El Salvador in the arbitration was Luis Parada, a Salvadoran lawyer who practices in Washington, D.C.   Parada has been a figure in a number of topics covered in this blog over the years in addition to the gold-mining arbitration.   He graduated from West Point, served in the Salvadoran military, and later got a law degree in the US.  Parada testified against the military command describing the cover-up of the Jesuit massacre, providing his testimony in the original 1991 trial in El Salvador and then in last year's trial in Madrid of Inocente Montano.  Parada also rejected the military's support of Nayib Bukele's incursion into the Legislative Assembly on February 9, 2020 and publicly gave up his rank of captain to make his point).

Following the arbitration victory, anti-mining activists lobbied and worked to get a law passed to prevent metallic mining in the country.   It was an effort which required coalition building and political savvy, in the effort to convince Salvadoran politicians that protecting the precious water resource in the country was more important than the promise of revenues from gold-mining dangled by the mining industry.   Despite the odds, the water defenders managed to get the first nationwide ban on metallic mining enacted anywhere in the world.

The book Water Defenders is available for purchase here.   There will be an online event with the authors, Luis Parada, and other experts, to launch the Water Defenders on March 23 at 7:00PM EDT.  Details here.

Environmental activists now want to make that ban on mining even more permanent.  They know that the current ban remains at the whim of a simple majority of lawmakers and the president.   So they are seeking to have the ban included in El Salvador's constitution where it will be much more difficult to reverse.

Activists have also denounced the failure of the government to take other steps required by the law banning metallic mining.  The government has not taken steps to mitigate the impacts of past mining.   The law also allowed a grace period until March 2019 to wind down "artisanal gold mining" -- where individuals use their own efforts, like in the abandoned Commerce Group mine in San Sebastián, to extract gold. These small-scale miners had been refusing to give up their livelihoods without the transitional support required by the original law. Such artisanal mining is both dangerous to the environment and to the miners.   The grace period lapsed without the cessation of small scale mining.