March 01, 2021
Preliminary results from Sunday's national elections in El Salvador show that president Nayib Bukele has consolidated power as his Nuevas Ideas party took commanding control of the country's legislature.   The party appears certain to have achieved the 2/3rds majority necessary not only to pass laws, but to appoint the next attorney general and members of the supreme court.   It was a decisive rebuke to the older parties, ARENA and FMLN, which had governed the country for decades.

The preliminary election results posted by El Salvador's Supreme Electoral Tribunal can be viewed here.
Nuevas Ideas and Bukele swept the Legislative Assembly elections for three main reasons. First, the president has successfully promoted a vision of El Salvador as a leading country in the region with a bright future. Second, the attacks on the incumbent parties in power ring true with the population. Third, the Salvadoran voting public did not see the value of a government of checks and balances and limits on any one person’s power.

When you listen to Bukele’s discourse about his plans for the country for any amount of time, you cannot miss the use of superlatives.   He tells the country Hospital El Salvador will be the “largest COVID-19 hospital in all of Latin America”  and that El Salvador has done the best job of managing the pandemic.  A new liquefied natural gas plant is the “largest foreign investment ever” in El Salvador. The country has the "largest chain of vaccine cold storage."   The country will soon eliminate 100% of the digital divide for its students. The country will build a new world class airport and a train route along the Pacific coast. The country has the best surfing in the world, etc., etc.

This vision, delivered skillfully by the millennial president is amplified and broadcast by a ceaseless public relations and marketing strategy using social media and traditional media, and paid for with public dollars.

The result is that, according to public opinion polls, a significant percentage of Salvadorans believe that El Salvador is on the right path. Something they had not believed in a long time. Even though they believe that the country suffered during 2020 because of the pandemic, they believe Bukele is managing it well.  And they were grateful that homicide levels rooted in the country's street gangs had dramatically fallen during Bukele's time in office.

That successful delivery of a vision of a bright future for El Salvador is coupled with nonstop attacks on the opposition political parties.

To be sure, those opposition political parties have much to be criticized for. Past presidents from both ARENA and the FMLN are charged with diverting hundreds of millions of dollars in public funds. Both parties are charged with paying tens of thousands of dollars to street gangs for support in the 2014 presidential election. Both parties give away patronage jobs in the Legislative Assembly as if it were their birthright. Both parties failed to move forward important legislation in the legislature. Multiple members of the Legislative Assembly are under investigation for deals with gangs, and multiple members are cited for having participated in war crimes during El Salvador’s civil war.

As a consequence, for a very long time, political parties and the legislature were the two institutions in which the Salvadoran public had the least confidence according to opinion polls. Bukele took the distrust of those parties and amplified it to his great advantage. The old parties have been completely unable to reform themselves, and new parties, Nuestro Tiempo and Vamos, were unable to gain much visibility.

This possibility that Nuevas Ideas would dominate the Legislative Assembly caused many persons to warn of the autocratic tendencies of Bukele, and to point out that super-majority control of the Assembly would remove many checks and balances on Bukele’s power. They warned of a populist dictatorship in the making.

Those warnings did not catch on with the Salvadoran public. Good governance, check and balances, and institutional values are too abstract when you are worried about the gangs on your street, the pandemic in your community, and the prospects of your economic future. And during the course of election day, Bukele provided further evidence that he cared little for the norms of El Salvador’s representative democracy. Salvadoran election law requires that campaign speech cease three days before the election, including election day. Bukele and Nuevas Ideas, however, campaigned throughout that time, blithely ignoring the requirement and daring the Supreme Electoral Tribunal to do anything about it. Bukele kept up a constant barrage of charges that there was going to be fraud committed by the opposition, yet there was never any evidence of this.  Bukele gave a press conference in the middle of the afternoon Sunday where he again urged on his supporters,  asserted that the Supreme Electoral Tribunal was attempting to block their victory, and attacked the country's investigative press.    His supporters loved it.
The tidal wave of support for Nuevas Ideas also appeared at the level of municipal elections.  Preliminary results show candidates from Nuevas Ideas winning mayor's offices in San Salvador, San Miguel and Santa Tecla, just to name a few.
Monday morning Salvadorans wake up to a country whose short term future is held in the hands of one political party, Nuevas Ideas, and its charismatic leader Nayib Bukele.  Time will tell whether checks and balances on a president's power are necessary for the future Salvadorans believe they voted for. 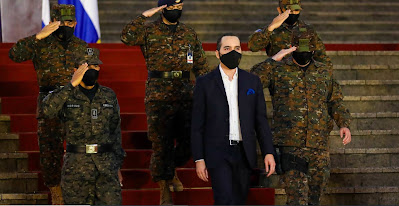 Chris Gomez said…
I will write the following as a practicing lawyer for 14 years:

I sincerely assure you that I DO NOT believe in the so famous Rule of Law of my Country El Salvador!

Why Here, the Administration of Justice does NOT work properly !! ...

Here, the majority of Judicial Officials and Employees do NOT have the vocation of public servants !! ...

Here, the Judges and Magistrates in their vast majority are NOT Suitable people! ! ...

Here, there is NO prompt and fulfilled justice! ..

Here, the false idea is sold that we have a Solid Rule of Law enshrined by an obsolete Constitution created almost 40 years ago on which the so False and Laureate Democracy falls! ..

And the worst thing is that they all grab their piece of law, wanting to justify their political ideology!

We need a radical change! Like it or not some!

Sad to be a lawyer in this country of Shit! ...

If this garbage does not change, I hope very soon I can retire from this, and stop making my life bitter🤭🤭😎😎😎
7:09 AM