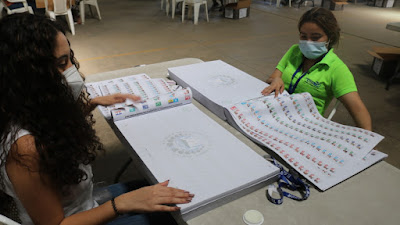 The ballots appear to be ready for El Salvador's upcoming elections in four weeks on February 28 for members of congress and mayors.   With 9 parties competing, Salvadorans will be faced with complex ballots in the larger departments.

The ballot which was last finalized is the ballot for legislative deputies from the largest department, San Salvador, after one candidate from Nayib Bukele's Nuevas Ideas party was banned from participation.  The Constitutional Chamber of El Salvador's Supreme Judicial Court ruled that Walter Araujo could not appear on the ballot for deputy in San Salvador Department under the flag of Nuevas Ideas.   The court ruled that the Supreme Electoral Tribunal (TSE) had failed to take required steps for verification that Araujo was of "Notoria Honradez" --  good character.    The petition before the court was brought by attorney Bertha María  Deleón who is a candidate for deputy for the new Nuestro Tiempo party.

Araujo’s been accused of harassing a politician from an opposition party, Bertha María Deleón, who’s been a vocal critic of Bukele’s presidency.

“Since July 2019, I began to criticize the rashness of President Bukele in some of his decisions and appointments of officials. Then, I began to be the focus of relentless mockery from Walter Araujo,” Deleón told VICE World News. “He defamed me, made memes, denigrated me, made up false information about alleged sex scandals involving me. In other words, pure gender violence.”...

“This resolution is a hope for women in El Salvador because we are usually afraid, and I include myself,” said Deleón. “[Bukele] is protecting him and is committing corruption because that is undue influence to want to stop prosecuting someone who has committed a crime. This inhibits women who are the targets of violence every day.”

El Salvador's Constitutional Chamber found that the TSE had not dealt with these allegations, which are the subject of a pending court case, in the manner required by Salvadoran law when it approved Araujo as part of the Nuevas Ideas slate of candidates.

The ruling came just as the TSE was getting ready to print the large ballots for the largest department which has 24 deputies.   Nuevas Ideas has now replaced Araujo with Ana Figueroa.

Nuevas Ideas responded to the court's ruling by claiming the judges were manipulated by corrupt interests and by asserting that the court's ruling means that other prominent candidates with pending criminal proceedings should be disqualified.  Those candidates include the current ARENA mayor of San Salvador, Ernesto Muyshondt, Norman Quijano of ARENA, Roberto D'Aubuisson, Rodolfo Parker and others.  Nuevas Ideas representatives have now filed court papers seeking to have those other candidates disqualified because they lack "notoria honradez."

These new challenges may not succeed because they are being filed so close to the election, nor does it appear that they were first presented to the TSE when the slates of candidates were subject to review.

After the court ruling barring Araujo, president Nayib Bukele responded with a series of tweets:

First he tweeted an image of a pawn (chess piece):


The chess reference is one he has used before to his followers to indicate that he believes he has strategically outmaneuvered his opponents.

A short while later Bukele tweeted out a photo of heavily armed troops:

Was this a threat? an homage to the armed forces? an inside joke?   Bukele did not say. Then to laugh at  those who saw a president tweeting images of armed troops as an indication of authoritarian tendencies, Bukele changed his profile picture to that of a fictional dictator.

On January 26, El Salvador's 39-year-old President Nayib Bukele sent local Twitter into a tailspin when he briefly changed his profile picture to an image of Sacha Baron Cohen from the movie The Dictator, where the English actor plays, unsurprisingly, an authoritarian dictator.

While the joke may seem harmless to outsiders, within the country it came on the heels of a fierce debate about the abuse of power by a Bukele ally against a female political rival of the president’s, and controversial comments about the extension of the presidential term.

It's not the first time that Bukele joked on social media about being an onscreen tyrant — after firing dozens of public officials when he entered office in 2019 he tweeted the word "DRACARYS" that is used by a Game of Thrones ruler to order her dragons to burn everything in their path.

There is a bigger question here than Bukele's sense of humor and whether or not Araujo is a misogynistic opportunist who uses social media to harass, threaten, and defame. A practice of disqualifying anyone for whom criminal charges are pending but there has not been a conviction can quickly become at tool for an unscrupulous prosecutor against political opponents.  When the prosecutor is an ally of the president, the ability to prosecute rivals is a favorite tool of tyrants. The presidential tweets may show that Bukele recognizes the gift the Constitutional Chamber may have just given him.

Don said…
Do you still think that the president has the population so riled up that they are killing people on the streets?
That is the Charles Manson theory. You are saying that Bukele, like Charles Manson, made people go murder people.
Sorry Dave last one.
5:51 PM

Anonymous said…
Disqualifying someone for having an open case in court is a bad precedent to set; I am sure political parties will use this precedent in upcoming elections. Now, if you use the criteria used in Araujo's case, Quijano, Muyshond, Parker, and D'Aubuisson should not be allowed to compete.
2:35 AM

Don said…
In El Salvador diputados have immunity once they are in office.
9:55 AM

Don said…
Also, Nayib The Supreme Leader was making fun of people like Tim for their pearl clutching BS takes on the so called political violence that he supposedly prompted. So, you can calm down Tim unless of course you think that those tweets might cause somebody to commit murder. In that case you should hurry up and call Jim McGovern and save the Salvadorans from themselves.
10:05 AM