“I have seen the affliction of my people” Exodus 3:7

We, pastors and priests of various Christian denominations, with deep concern about the situation of sin that permeates Salvadoran politics and society in general, wish to express the truth in love to churches, and people in general, to warn them against temptations, false doctrines and political idolatries. We express our deep unease at a dangerous time when the churches are exposed to the temptations and bribes of power that seek to silence their prophetic voice when, rather, they should be attentive to Paul's exhortation: “Do not be conformed to this world, but be transformed through the renewing of your mind, to be able to discern the will of God: what is good, acceptable, and perfect" (Romans 12: 2).

We express our deep regret over the practice of the lie that has invaded political life and is contrary to the commitment to truth that is morally central to personal and public life. God designed the key to trust in life in society when he stated, "Do not bear false witness" (Exodus 20:16). But what we observe now is a normalization of the lie without decorum on the lips of those who should be leaders of the country. The lie by civil servants is premeditated, persistent and shameless.

To reiterate false data, misrepresent and distort information upsets moral expectations and affects the formation of children and young people. It is our duty to remember that lying always leads to bondage while the truth is liberating: "You will know the truth and the truth will set you free" (John 8:32).

We express our deep regret for authoritarian and domineering attitudes that contradict Christian teachings and break democratic rules of government. Jesus said, “The rulers of the nations oppress their subjects, and high officials abuse their authority. But among you, it should not be like this. On the contrary, whoever wants to become great among you must be their servant ”(Matthew 20: 25-26). Rulers are called to service, not tyranny, so the limits, checks, and balances of democracy must be protected while promoting humility. We support democracy, not because we believe in human perfection, but on the contrary. Therefore, we reject the tendency to autocratic political leadership as a theological danger that threatens the common good. We are concerned about the lack of respect for the rule of law, not recognizing the equal importance of the three branches of the state, and replacing civility with dehumanizing hostility towards opponents. Neglecting ethics and accountability to favor arrogant personal recognition, raises concerns of political idolatry, since it places electoral interests above ethical norms that should be non-negotiable for Christians.

We express our deep regret over sinful attitudes of contempt for human dignity that are expressed in continual incitement to hate one another. The violent rhetoric has already caused the first murders of innocents. People created in the image and likeness of God (Genesis 1:26), with inalienable dignity and worth, and whose blood now cries out to heaven. Respect for the sanctity of life must begin with the civility everyone deserves. Therefore, we reject all types of violence, mistreatment, insults, abusive aggressiveness, misogyny and sexual harassment that are manifested in the political environment. It is regrettable that such practices are not only ignored by the silence of officials, but they are encouraged by covering up those who exercise them.

We express our deep regret over the increasingly scandalous cases of corruption that come to light too often and the voluntary acceptance by God's people who should be firm in rejecting such practices. The Scriptures advise: "Turn away from idols" (1 John 5:21). Contrary to that, the idol of corruption is once again worshiped in our country in exchange for the deceptive economic salvation that it offers to its believers. This idolatry, in its squandering of scarce public resources, demands, like all idols, victims to be sacrificed. These are the poorest people whose health and life are sacrificed on the altar of ambition. The people's aspirations for honesty from their rulers are once again mocked as in the past, while the country is heading for a fiscal crisis with serious consequences.

We encourage pastors to speak and act with faith and courage not for political reasons, but because they are disciples of Jesus Christ, the Lord. Our urgent need in this time of moral and political crisis is to regain the power to confess our faith, mourn, repent, and make amends. The Lord, who is just, demands the blood of the poor and calls his people not to be naive accomplices who tolerate idolatry. On the contrary, he calls us to re-identify the true interests of the dispossessed without being distracted by the force of publicity.

We encourage each believer to reason out of their own conviction and criteria, to be in solidarity and compassion with everyone, to work to overcome this dark time, and to meet again as brothers and sisters who walk in the construction of the Christian dream of a reconciled society, with justice and peace. 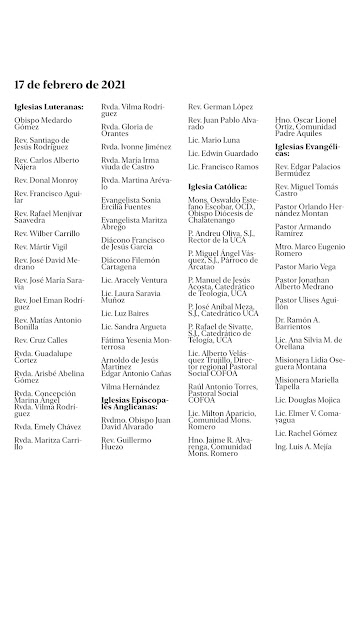 Donald Schaeffer said…
What a strong letter! I think the wisdom within applies to many other countries as well, ours included.
8:14 AM