US indicts top MS-13 leaders; an extradition request would be awkward for Bukele

The US Department of Justice has unsealed an indictment against the top leadership group of MS-13, the "Ranfla Nacional."   Eleven of the 14 defendants are in prison in El Salvador from where they direct local and international operations of the gang.

Here is the introduction to the US indictment:

La Mara Salvatrucha (hereinafter "MS-1 3") was a transnational criminal organization with tens of thousands of members worldwide whose members engaged in "terrorist activity," as defined by Title 8, United States Code, Section I182(a)(3)(B)(iii) and (iv), and in "terrorism," as defined by Title 22, United States Code, Section 2656f(d)(2). MS-13 and its members used violence against law enforcement, military members, government officials and civilians in El Salvador in order to obtain concessions from the government of El Salvador, achieve political goals and retaliate for government actions against MS-13's members and leaders. MS-13's leaders also directed members to commit acts of violence, including murder, in the United States, In order to achieve its goals in El Salvador, the United States and elsewhere, MS-13's leaders recruited large numbers of members; established an organizational leadership structure; issued rules to govern MS-13's members; established military-style training camps; obtained weapons such as rifles, handguns, grenades, improvised explosive devices ("1EDs") and rocket launchers; negotiated with El Salvador government officials; engaged in public relations efforts; controlled neighborhoods; and directed acts of violence and murder in El Salvador, the United States and elsewhere. Further, MS-13 used its large membership in the United States to engage in criminal activities such as drug trafficking and extortion to raise money to support MS-13's terrorist activities and terrorism in El Salvador and elsewhere, and directed members in the United States to commit acts of violence, including murders, in furtherance of MS-13's goals and to retaliate against the United States for actions, or perceived actions, taken against MS-13 and its leaders.

(One initial question comes from reading this paragraph.   Why is it written in the past tense?   Is the government saying that MS-13 once did these things but no longer does them? As a lawyer working in US courts, I would use the present tense if I wanted to convince a judge that this gang was a clear and present danger).
The indictment is filed in the US District Court for the Eastern District of New York which includes parts of Brooklyn and Long Island.   Those areas have seen years of MS-13 linked violence according to officials:

Though the indictment unsealed on Thursday did not give details of specific crimes ordered by the defendants, it said they had established multiple branches on Long Island, in Queens and in Brooklyn, which committed murders, attempted murders, assaults and kidnappings.
“MS-13 is responsible for a wave of death and violence that has terrorized communities, leaving neighborhoods on Long Island and throughout the Eastern District of New York awash in bloodshed,” said Seth D. DuCharme, the acting U.S. attorney for the Eastern District.

The US has said that it will "explore options" for the extradition of members of the Ranfla from El Salvador to face trial in the US.
Steven Dudley at InsightCrime has written a few articles about the indictment.  In Mafia to Terrorists: How US Prosecutors Have Bent the Law to Fight MS13,  he explains how indicting MS-13 under terrorism law does not particularly fit the nature and organization of MS-13.   Terrorism laws have usually been applied against groups or persons formally designated as terrorists by the US government, which is not true of MS-13, although gangs have been labelled terrorists by El Salvador's supreme court.   On the other hand, MS-13 does not operate like the Mafia and might not fit within federal racketeering law.   In another article, Dudley describes some advantages to the terrorism charges, like the lack of a statute of limitations, the availability of kinds of wiretapping, and penalty provisions that may be attractive to prosecutors.
The indictment comes at the same time that investigative reports have revealed ongoing discussions between officials of the Bukele government and members of the Ranfla Nacional.   An expose in El Faro in September 2020 described meetings between imprisoned MS-13 gang leaders and  Osiris Luna Meza, the national director of prisons, Carlos Marroquín, the director of a government gang prevention office, and other anonymous hooded figures:

El Faro obtained copies of hundreds of prison reports confirming dozens of covert meetings between government officials and gang leaders since 2019, as well as intelligence reports detailing the outcomes of the encounters. Representatives of the executive branch and MS-13 agreed to the reduction in homicides, prison privileges, and long-term pledges tied to the results of congressional elections in 2021.

Bukele strenuously denies the reporting done by El Faro.
A follow up report on January 12 of this year, however, describes how one gang figure in the Izalco prison received medical transfers to a distant hospital in Zacatecoluca despite the prison doctor saying he was in good health.   Zacatecoluca just happens to be home of the maximum security prison where most Ranfla Nacional leaders are imprisoned.  The report of the unusual medical transfer adds to evidence of discussions proceedings between government officials and the MS-13 leadership. 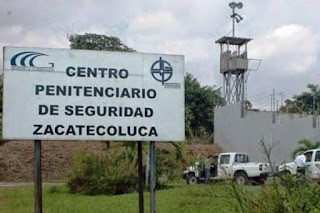 When the US comes to ask for the extradition of the MS-13 Ranfla Nacional, how will the Bukele government respond?   Extraditing the leaders to the US where they could face life sentences in US maximum security prisons would seem to be consistent with the hard line security policy which Bukele presents to the Salvadoran public.   On the other hand, extradition might destroy whatever benefits the Bukele government is receiving from these meetings, which El Faro has indicated include the significant reduction in the level of homicides and potential electoral support in the upcoming February national elections.
It does seem like another possibility could be that the US wants to disrupt negotiations between the gang and Bukele.    The indictment itself states at paragraph 24-25 that MS-13 believed the US had  wanted the 2012 truce among El Salvador's gangs and government terminated.   Perhaps they were right, and perhaps the indictment is an attempt to quash similar negotiations.
Gang truce Gangs Nayib Bukele US relations