November 15, 2020
On November 3, El Salvador's environmental ministry ("MARN" for its initials in Spanish) gave the green light to a commercial/residential mega-development on the outskirts of San Salvador. The development is called "Valle El Ángel," a project of real estate developer Urbánica. The owners of Urbánica are the ultra-wealthy Dueñas family in El Salvador, and their proposed urbanization development of 8000 houses, shopping centers, churches and more would threaten the available water resources in the capital region, according to environmental and community groups. Most of the land, located along the Pan-American highway, is currently used to grow sugar cane. See photos here.

On hearing the news, Carlos Flores, one of the leaders of groups opposing the project, decried the failure of MARN to address environmental concerns which had been raised.   Earlier this year, MARN had acknowledged questions about the hydrology impact of the development, but there has been no indication or published study results showing that those concerns have been addressed.   According to Flores, the award of an environmental permit is circumventing the legal framework for managing such risks.

The online periodical Gato Encerrado has been following the Valle El Angel project closely for more than a year.   Gato Encerrrado requested the documents underlying the decision to grant the environmental permit in an open information request, but was informed that the documents would not be released because they were confidential and related to agency decision-making processes that were not yet final.  This despite the fact that the authorization published on the MARN website only requires the Dueñas group to pay an environmental impact bond before it can start construction.  Gato Encerrado reported that MARN had been ordered by the Institute for Access to Public Information to provide additional information to the environmental groups, but MARN had ignored those orders.

The opponents to Valle El Ángel argue that this mega-project will cause the over-exploitation of already stressed aquifers which provide water for the surrounding region; that the project will prevent the re-charging of the aquifer as large areas of pavement prevent rainwater from infiltrating the soil; that the project will lead to discharge of waste waters into local surface streams; and that it will add to the traffic chaos which already exists in this area of greater San Salvador.  In a nation already suffering from severe water stress, the government is granting rights to these private real estate developers to extract water at the rate of 240 liters per second, so they can build a luxury housing project. 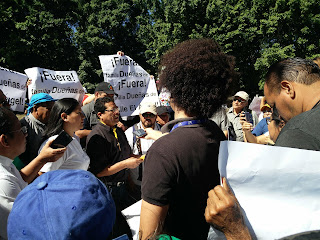 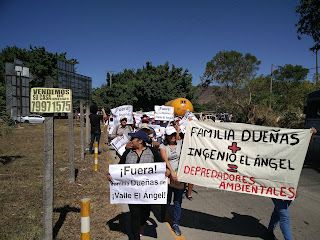 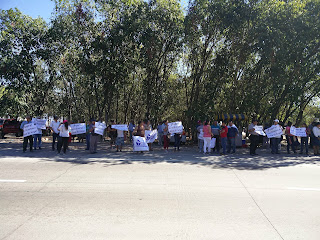 Photos from a February 28, 2020 protest against the project
The granting of the environmental permit was foreshadowed by an answer given by Nayib Bukele during a September press conference.   Bukele was asked by a journalist from Gato Encerrado whether the government of El Salvador was going to sign the Escazú  Agreement, a international environmental compact among Latin American nations.  He responded:

We would sign it if small changes were made that would appear to be just of form, but they are important to guarantee that the environment is taken care of, which is what the Agreement intends, without preventing the development of our countries, which lack development. In other words, we cannot stop building houses.

The formal name of the Escazú Agreement is the Regional Agreement on Access to Information, Public Participation and Justice in Environmental Matters in Latin America and the Caribbean.  It has been hailed as a first of its kind human rights environmental treaty.   Given the treaty's focus on human rights, access to information, and public participation, it is perhaps not surprising that Nayib Bukele, who has been criticized in all those areas, is opting not to sign an international agreement his country's negotiators previously approved.
Similarly, last year environmental minister Fernando López, told the Legislative Assembly that his ministry is going to make more flexible the process of granting economic permits and that permits for projects with large-scale impact would be decided in a maximum of 60 days. "Flexibility" is often a code word for "easier for business to get what it wants."
Opponents to the project are not giving up the fight, however.   They have petitioned the country's attorney general to review potential illegality and have brought claims in the country's environmental court.   The groups have a petition before the country's Supreme Judicial Court challenging the constitutionality of the agreement between ANDA, El Salvador's water authority, and the Dueñas group which granted the right to drill wells to exploit the subterranean water reserves.
Conflicts pitting big development projects against environmental concerns are going to continue under the Bukele government.   Throughout his political career, Nayib Bukele has shown a fondness for big, visible projects.   Whether it was the renovation of the historic center of San Salvador, the new Hospital El Salvador, Surf City, or a proposed international airport in the east of the county, Bukele has thrown his support behind mega projects which can generate lots of photo-ops. Another example of this was his announcement that a new hydro-electric dam would be renamed the 3rd of February Dam for the February 3, 2019 election which brought Bukele into power.  Leaving a large swath of land undeveloped so that water can percolate into an aquifer serving millions does not generate a series of impressive pictures or something to put one's name on.
To be sure, prior governments in El Salvador have also given the environment short shrift.    Large scale sugar cane growers, developers of shopping centers, builders of gated residential developments, and industrial polluters have all gone largely unregulated in this small, densely-populated country.  Advocates have been fighting to gain legal protection for water resources for decades with little to show for it.  A ban on metallic mining was achieved after years of intense pressure, and that law stands alone as an achievement of the  Salvadoran environmental movement.
The approval of the Valle El Ángel project and Bukele's rejection of the Escazú accord show that in El Salvador today, protection of the environment continues to be seen by authorities as an impediment to economic development.   It is a short-sighted view which will have negative consequences for future generations.
Environment Nayib Bukele Water