For those living in El Salvador, it can feel like life is being lived in a series of apocalyptic moments, as plagues, natural and man-made, buffet the country.

1 )   The newest plague – voracious locusts.    Swarms of flying locusts, which can devastate fields of crops in a matter of hours, have arrived in Central America.   The hungry insects have already caused damage in the department of Peten in Guatemala and the International Organizationfor Regional Agricultural Health (OIRSA)  has warned El Salvador to be on alert.

President Nayib Bukele promptly announced his government is taking immediate measures to confront the threat.   The government circulating images of soldiers walking through corn fields searching for the insects.   The president flew with a squad of military helicopters to hold a press conference in a corn field in San Vicente department to describe the government’s commitment.  Bukele said the government was committed to fighting an outbreak of locusts and would be ready with fumigation measures if the locusts were found in El Salvador including the use of drones, teams of soldiers, and helicopters.

2)  The ongoing plague – COVID-19.  The number of cases of COVID-19 in El Salvador continues to soar.  The official count of confirmed cases of COVID-19 passed 12,000 and president Bukele has confirmed that this is a significant undercount pointing as well to another 11,000 suspected cases.  Perhaps most worrying is the steep increase each day in the number of persons classified as in  “moderate, critical or grave” condition.   As of today there are 2796 Salvadorans in that category, or 22% of the country's 12,578 confirmed cases. 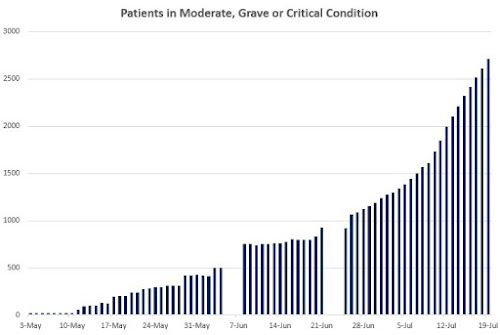 The official death toll of confirmed cases is 344, but many others have certainly perished from the disease.   Municipal cemeteries across the country are reporting themselves to be "colapsado" by the number of burials of the deceased under strict sanitary COVID-10 protocols.  Upwards of 700 burials of confirmed or suspected COVID-19 victims have been tallied by journalists.

At the moment, Salvadorans are not legally required to stay at home as they were during weeks of strict home quarantine, but the government has not reopened large swaths of the economy as illness totals continue to hit new highs.  On Friday, Bukele announced that phase 2 of reopening the economy, which would include restoring bus service around the country, would proceed as scheduled on Tuesday.  Bukele asserted that since the Legislative Assembly would not give him the power to impose a nationwide strict home quarantine, there was not much point in continuing to restrain economic activity.  However, on Sunday, Bukele reversed himself, citing a request by his Health Minister, and informing the country in a tweet that phase 2 would wait for at least two more weeks.

View Víctor Peña's photos of the toll the pandemic is taking on Salvadoran families.

3)  The resurging plague -- poverty and hunger.

The macroeconomic numbers for El Salvador are grim as a result of the recession ignited by the coronavirus.   A new report from the Economic Commission for Latin America and the Caribbean (ECLAC) titled Addressing the growing impact of COVID-19 with a view to reactivation with equality highlights the economic downturn and its impact on poverty:

Journalist Carlos Dada offers portraits of the pandemic of poverty and hunger which explain what these macroeconomic numbers mean in human terms:

But in El Salvador, need always outweighs the capacity to help. Only one in five working Salvadorans has a job in the formal economy. The rest live off what they can make every day. If they stay home, they don’t eat. They’ve been home for three months now. To make matters worse, the 20 percent of the population that buys from the rest is now going through its darkest hour.

According to Ricardo Castaneda, executive director of the Central American Institute of Fiscal Studies (ICEFI), the current economic crisis unleashed by the pandemic and the storms could lead to the loss of more than 200,000 jobs in the formal labor market. The Salvadoran economy, according to the Central Reserve Bank, is projected to contract between 6.5 and 8.5 percent, in terms of gross domestic product, this year—a drop unseen since the start of the civil war. But those impersonal figures, which tend to exceed the projections, translate into disgraced Salvadorans.

At this moment, says Castaneda, there are 800,000 people at risk of sliding into poverty because, in addition to the crash of the economy and the storm damage, remittances—the main source of income for hundreds of thousands of Salvadorans—have also starkly declined. “It’s the perfect storm,” he says. In perfect storms, whoever has the least tends to lose what they have soonest.

4)   The plague whose symptoms are under control – gang violence.

In most previous years, the plague on El Salvador which claims the most lives and gathers the most headlines is gang violence.   Yet during the government of Nayib Bukele, the homicide level has declined dramatically.   So far, the average daily homicide rate has been only 3.3 per day, a large decline from double digit daily averages which El Salvador was accustomed to for many years before 2018.

In a recent report titled Miracle or Mirage? Gangs and Plunging Violence in El Salvador, the Crisis Group looks at these reduced violence levels and asks what is necessary to make these gains permanent.

5)   The plague which worsens all the other plagues – a dysfunctional government.

All of the plagues afflicting El Salvador are made more difficult to manage by a polarized, dysfunctional government.   Bukele continues to rail against the Legislative Assembly because it will not authorize a strict, nationwide quarantine and rather proposes to have localized measures.  The administration rejectst transparency measures regarding its pandemic response and who benefits from the purchases it makes.   The Legislative Assembly meets but seems to accomplish little.  All the politicians in the country are focused on the February 2021 elections of seats in congress and of all the mayors.  Bukele continues to attack the independent press in the country.

El Salvador needs cures and a healer to overcome these plagues.  So far there is not one in sight.

Don said…
This comment has been removed by the author.
5:32 PM

Don said…
This comment has been removed by the author.
9:30 AM

Don said…
This comment has been removed by the author.
11:04 AM

gregory Vogel said…
Thank you as always Tim for your informative blog posts and insightful commentary for those of us trying to keep updated on current events in El Salvador.
10:59 AM