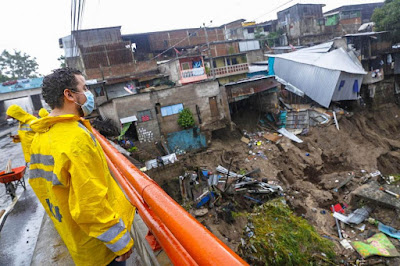 Tropical storms Amanda and Cristobal produced widespread flooding and landslides in many parts of El Salvador.  They represent another major relief effort for a government already stretched thin by pandemic response and an economy which has been shuttered for almost three months.

Similar to its dashboard for COVID-19, the government established an online site to tally the losses from the storms.   The site is located at http://emergencia.marn.gob.sv/.

As of June 12, the official death toll from the storm stood at 30 persons with one person still missing. The government reports almost 30,000 families affected and some 5000 people currently in 144 shelters throughout the country.  392 schools suffered damage and thousands of acres of corn fields were flooded. 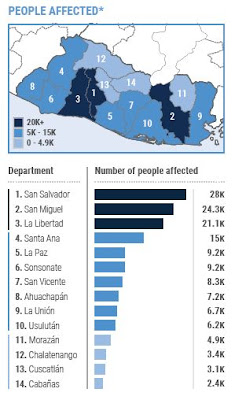 From the UN Office for the Coordination of Humanitarian Affairs:


The storms come as El Salvador, home to 643,000 people in need according to the recent regional Humanitarian Needs Overview, continues to deal with the COVID-19 crisis that is compounding existing vulnerabilities. WFP estimates that there are some 350,000 food-insecure people in the hardest hit municipalities.

A report from Doctors Without Borders describes the compounding of problems and anxieties faced by persons living on the margin:


“These communities were already facing uncertainty and lack of access to healthcare because of the COVID-19 pandemic, and this only makes the situation worse,” says Luis Romero Pineda, MSF’s field coordinator in El Salvador. “People are at risk of a range of mental and physical health problems following the destruction of property and the loss of loved ones.”...

Feelings of anxiety and sadness are commonplace. Before they lost their belongings during the storm, people already faced the economic and social consequences of complying with the quarantine imposed by the Salvadoran government to prevent the spread of COVID-19. The lack of a fixed income and the lack of food are massive concerns for many people.

From the World Food Program:


"These are the worst rains I've seen since Hurricane Mitch in 1998," said WFP’s Representative in El Salvador, Andrew Stanhope, who added that "the impact of Tropical Storm Amanda and the pandemic has worsened the food security of the poorest families. Now more than ever we must redouble our efforts to urgently reach those most in need with food assistance."

The west and centre of the country are the main areas affected by the storm, the first in this hurricane season. Authorities have reported heavy flooding, with between 500 to 800 mm of rain accumulated in some departments, and severe damage to infrastructure. The government of El Salvador has declared a state of emergency.