June 28, 2020
Friday, June 26 marked 100 days from the point where El Salvador recorded its first confirmed case of COVID-19.  Since mid-March, the administration of Nayib Bukele had used an improvised strategy against the deadly virus which focused on blocking the borders to incoming travelers, enforcing a nationwide stay at home order, and using "contention centers" to hold persons exposed to the disease or who had violated domestic quarantine rules.
Despite these measures, the size of the pandemic outbreak in El Salvador has steadily progressed, albeit more slowly than in many other countries.  Friday also marked the high point of a number of statistics of the virus spread in the country as published by the government COVID-19 website:
According to the government's official tally, 143 persons have succumbed to the disease who tested positive for the disease, but this number is almost certainly a significant undercount of the total number of deaths.
One hundred days into the pandemic's spread through El Salvador, the complete breakdown of cooperation between the executive and legislative branches of government continues.  President Bukele continues to rule by decrees which vary from laws passed by the Assembly, and although the Assembly passes laws to address the pandemic, Bukele vetoes those laws because they do not contain all the provisions which he demands.  The Assembly then overrides the vetoes, but when a veto is based on Bukele's claim that the laws violate the Constitution, the Constitutional Chamber must then rule on whether the law can go into effect.
Bukele has shown little interest in working with the Legislative Assembly, instead asserting on Friday that the other branches of government were guilty of genocide. 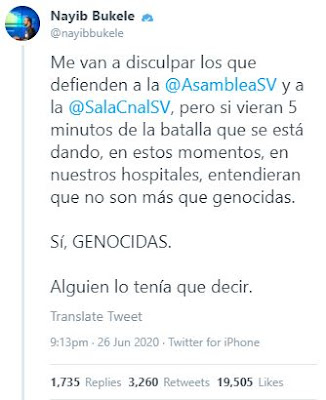 A countrywide stay-at-home order is no longer in effect.  The government is currently following a plan to reopen economic and social activity negotiated with business sectors and international observers.   In this current phase 1, maquila textile factories, some manufacturing, mechanic workshops, beauty salons by appointment, and certain other businesses have formal approval to reopen.  The public transport system remains closed until phase 2 which starts on July 7.   Additional reopening phases follow every two weeks after that.
The government opened "Hospital El Salvador" with a national address by the president on Tuesday, June 22.   The hospital has been constructed by reconfiguring the CIFCO convention center in San Salvador as a facility dedicated to treating COVID-19 patients.   Bukele has proclaimed the hospital the largest and most modern in Latin America which will eventually have 1000 intensive care beds. (This first phase opens with 400 beds according to the government).   A few patients were transferred into the hospital on Thursday and Friday. 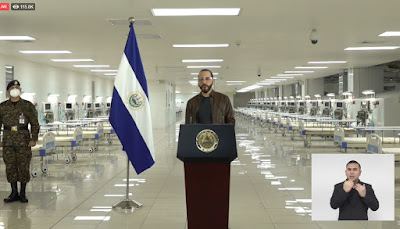 Certainly the surface view appeared to present a modern facility with brand new equipment for hundreds of beds, an electronic monitoring center and new testing and diagnostic equipment.   In a country which has suffered for years in under-investment in its healthcare system with crowded and inadequate hospitals in the public system, the opening of a new hospital as well as upgrades of other hospitals around the country is a welcome development.
Questions were still unanswered about the new hospital, however.   Where was the country going to find the trained staff for this hospital? The hospital posted a list of job openings on Twitter which included every possible role.   Did it actually have all the supplies and equipment and facilites to provide adequate medical care?   Who had profited from the contracts awarded to develop the facility?   The government fueled these questions and suspicions when it refused to allow members of the press to view the interior of the facility when president Bukele unveiled it.
El Salvador slowed the growth of COVID-19 in the country for months with a series of strict measures.  But those measures could not be maintained forever, The disease is almost unstoppable in a densely populated country with leadership which is not unified, with large segments of the population who must get out in order to put daily food on the table, and with high numbers of people with pre-existing conditions such as diabetes or high blood pressure.   Avoiding a greater tragedy will depend on the the collective will of the people to follow social distancing, mask-wearing, and staying at home when possible. 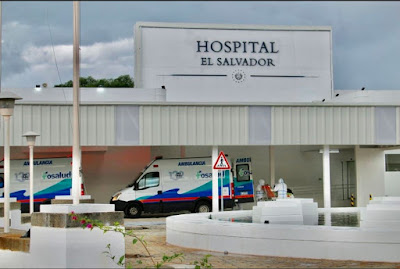