The ongoing health crisis and the conflict of power 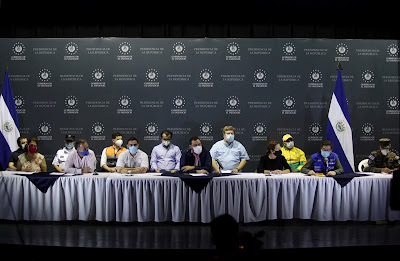 El Salvador is now facing a decision which every country afflicted with the coronavirus pandemic must make.   How long should stringent measures locking down the economy and restricting human mobility last and how should the economy be safely restarted?   There is no universal game plan or solution to this.   What worked in China or New Zealand may not work or may not be possible in Texas or Latin America or Africa.

The current progress of the COVID-19 disease in El Salvador strongly suggests that the present moment is not the time to let up on quarantine measures.   On Thursday May 14, the government had its highest single day death toll as it reported three deaths from COVID-19 bringing the national total to 23.   Confirmed cases of COVID-19 increased by 98, the second highest single day toll.  The government went from reporting 21 people hospitalized to 127 persons hospitalized in only 5 days.

Here is my tracking chart of local cases in El Salvador.   At the moment, there is no sign that the peak has been reached nor that El Salvador is on the downward side of the pandemic's impact. 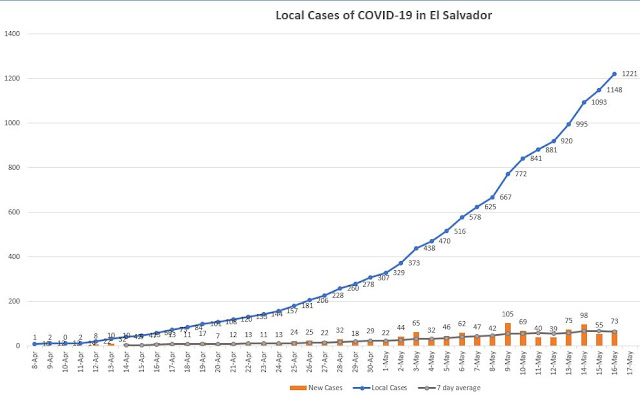 The forecast model from the MRC Centre for Global Infectious Disease Analysis, Imperial College London, highlights a possible scenario of rapidly increasing infections if current restrictions on movement are relaxed: 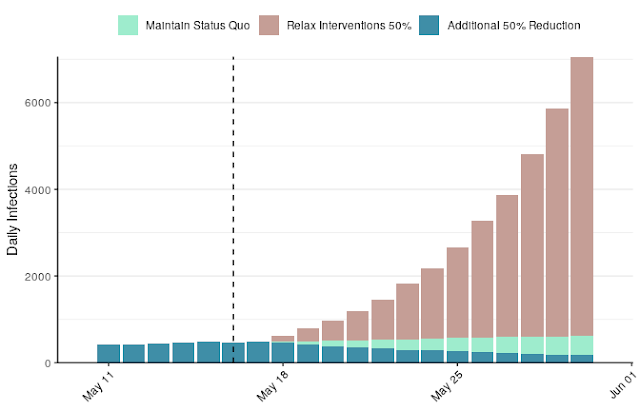 On Saturday, the law passed by the Legislative Assembly which declared a State of Emergency in El Salvador expired.  The current domestic quarantine under which Salvadorans are confined to their homes remains in effect just until Tuesday.  Thus El Salvador must decide what happens next.  Inaction is not an option.  But in El Salvador there is a major dispute over who gets to participate in that decision.

Bukele sent his proposed extension of these laws to the Legislative Assembly on Thursday.   But with ARENA and FMLN joining forces in opposition, the Assembly refused to receive Bukele's proposal and submit it to debate.   Instead, the opposition legislators indicated that they would draft their own measures for quarantine and to gradually reopen the economy.  A session of the Legislative Assembly to vote on such measures is scheduled for Monday.

This approach of the Legislative Assembly did not satisfy Bukele.  Instead, a press conference was convened at ten in the evening to announce that the president was unilaterally declaring a State of Emergency to last for the next 30 days.  The announcement was made by Conan Castro, the legal secretary to the president.  President Bukele did not appear at the press conference, but was active on Twitter, asserting the existence of presidential powers which allow him to take such actions.

All Presidents in the democratic history of our country have had the power to declare a State of Emergency and have exercised it, without legislative approval. Will a President be prevented for the first time from exercising that vital power of the Civil Protection System?

Subsequently, the country's attorney general, Raul Melara, declared that Bukele's declaration of a State of Emergency was unconstitutional.   Melara asserted that a president could unilaterally declare a state of emergency only when the country was faced with national disasters preventing the Legislative Assembly from meeting, but the Legislative Assembly knew the situation facing the country and is going into session on Monday.  Melara indicated his office would file a challenge with the Constitutional Chamber of the Supreme Judicial Court. Melara's declaration was backed by groups from civil society focused on good government.

A protest movement is emerging against Bukele's handling of the crisis.  Each night at 8:00 pm, protesters go out and honk car horns and bang pots and pans to signify discontent with the way the government is handling the crisis, to seek a lessening of restrictions, to advocate for persons stranded outside of the country, to denounce arbitrary apprehensions, or to denounce the lack of transparency surrounding the government's plans.   Bukele's supporters have disparaged the nightly protests, calling them "ProtestaDeLosRicos".

Also appearing across the country are white flags hung outside houses of people pleading for help because of hunger, unemployment and lack of resources.   They are banners of desperation.


Inhabitants of the canton La Esperanza, in Ilopango, protested this Saturday with white flags, as a symbol of lack of food 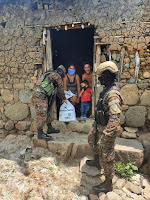 The government is in the process of mobilizing a delivery of basic food supplies to a purported 1.7 million families.   Delivery is coordinated through municipal governments and through the armed forces and police.

Meanwhile, the government of El Salvador also appears to be facing a fiscal crisis.   Although the Legislative Assembly has approved $3 billion in extra spending related to the pandemic, the government has not yet managed to finalize loans with international lending organizations or by floating a bond issue in international markets.

One reason Bukele has trouble reaching common ground with the Legislative Assembly and with his critics in civil society and the business community has been the government's refusal to be transparent about many aspects of how it has managed the pandemic.

There are concerns about transparency and controls over the money the government is spending.  Early in the crisis, the Legislative Assembly approved a $2 billion fund for responding and established a committee with representatives from business and civil society to oversee the spending of the fund.  All the members of this Committee recently resigned.  The committee members expressed that they had been frustrated in their attempts to get information from the Bukele government, starting with the process for delivering $300 subsidy payments to almost 1.4 million families.   One of the members, the University of Central America (UCA) also announced that its reasons for withdrawing from the committee also included concerns over the government's lack of respect for human rights in managing the crisis.

Bukele's team fired back, claiming that the Committee quit after being told that members would need to submit financial statements in order to participate.   Omar Serrano, vice rector of the UCA, responded that this was a lie and that there was never been a discussion of such a requirement and that, in any event, he was happy to submit one.

The government has failed to comply with a law which required it to provide monthly reports on spending on the emergency.  Yet only four ministries have provided the reports, leaving 12 ministries and the office of the president out of compliance.

Bukele is also feuding with the business community.   While he had solid support for the lockdown of the country back in March, the business community is frustrated with the lack of certainty about when the economy will be reopened and even what the plan for reopening might look like.   When the national association of private business (ANEP) also resigned from the committee overseeing pandemic response funds, Bukele said he would not recognize Javier Siman, the new head of ANEP.   Then, in what is seen by many as an act of retaliation against the Siman family, soldiers shut down a garment factory operated by Felix Siman which said it was sewing masks, gowns and other protective items for medical professionals.   The Minister of Labor, however, said the factory was shut down for not complying with limits applying even to essential businesses concerning the percentage of capacity which could be active.

In the days leading up to the current clash between the Salvadoran president and congress, all of the political parties expressed the importance of stay-at-home measures to combat the virus.  Although there is acknowledgment that the country cannot afford a dramatic increase of COVID-19 cases and thus needs some form of quarantine, there is deep disagreement over who gets to participate in directing the country's response.  By all appearances, Bukele believes that he and his team should be the only persons managing this crisis.  He wants the Legislative Assembly to authorize and ratify his decisions, not to participate in them.  With popular support, and the backing of the armed forces and PNC, Bukele figures no one else has the practical ability to say otherwise.

Tambopaxi said…
I haven’t followed Salvadoran politics in a while, sorry to see these negative trends, but u fortunately, nothing new in the history of the country...
5:35 PM