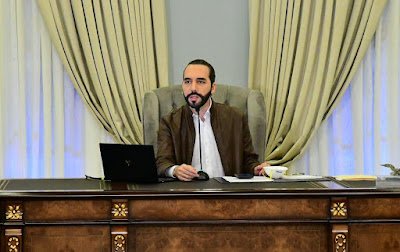 El Salvador has a level of infection and deaths from the novel coronavirus which is well below the world average, but it is growing.   Tonight the country's president Nayib Bukele made a national broadcast to announce that he was toughening the stay-at-home regulations under which the country has been living since the fourth week in March.

Before he announced the measures, Bukele expressed his frustration at what he felt was a lack of compliance with the current stay-at-home order.   He showed photos of traffic filled streets, someone getting a hair cut, a person taking a photo with their cell phone, someone carrying a pizza home from a restaurant.

He also showed images of cadavers and punitive measures from other countries including the Dominican Republic, Mexico and Peru, urging Salvadorans that they did not want to end up in the pandemic situation faced by those countries.

He showed graphs and charts about levels of confirmed cases, deaths and testing in El Salvador and elsewhere.   His presentation was meant to show that all El Salvador had done to date had not been enough to flatten the curve of new cases in the country.

Bukele went on to describe all the measures his government was taking to modernize hospitals, to build temporary hospitals and to turn the convention center into a gigantic space for treating persons suffering from COVID-19.   He also described how the presidential residence was being turned into a respite center where medical professionals could rest without fear of contaminating their families.

Yet, Bukele told his audience, none of this would be enough if Salvadorans did not bend the curve of new infection lower by failing to stay at home.   As a consequence, he announced new measures to toughen the current restrictions on movement.  Beginning Thursday, Salvadorans will only be allowed out to purchase food or medicine twice a week.  The date will depend on the last digit of someone's national identification card. At all other times they must be at home. Only supermarkets, pharmacies and banks arre allowed to operate.   Restaurants may only offer delivery service. No one in the greater San Salvador metro area may travel from one municipality to another except as part of an authorized employment.

People who violate the order will be treated as having been exposed to the virus and carried to a containment center.

There will be a re-evaluation after 15 days.  The government says it will be passing out 2.7 million baskets of basic foodstuffs to address food insecurity.  If these measures succeed in lowering the level of new COVID-19 cases in the country, then there can be a move towards gradual reopening of the economy.   If not, Bukele said, the measures might need to be hardened further.

Anonymous said…
You should add that this restriction is only to the department of San Salvador and not the entire country.

"No one may travel from one municipality to another except as part of an authorized employment."

Lawrence M. Ladutke said…
Basing days you are allowed to shop on identity card digits means that the gangs will now be demanding that Salvadorans show them their cards.

Also, even if it were only the police checking, this would still be a strong vector for the disease to transmit to the police and then to the other people they check.
7:43 AM

Tim said…
Thanks Unknown. Will revise. Larry, gangs already demand to see DUIs to determine if you live in enemy territory. Vectors? No one said this policy was developed by public health experts.
7:55 AM

Unknown said…
when will the airport open? also are any flights allowed to mexico at this moment? what about to the united states?