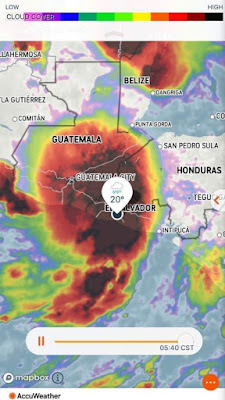 On the last day of Nayib Bukele's first year in office, the first named storm of the Pacific hurricane season, Tropical Storm Amanda, brought floods to El Salvador.   Floods and landslides destroyed homes in many areas of the country. Bukele declared a national State of Emergency.  Late in the day on Sunday, early tallies of the damage included 14 fatalities, hundreds of homes flooded and at least 1200 in shelters.

Particularly hard hit were some communities in San Salvador close to Arenal Monserrat, one of the waterways flowing into the Aceihuate River.   Images of the flooding in various areas: 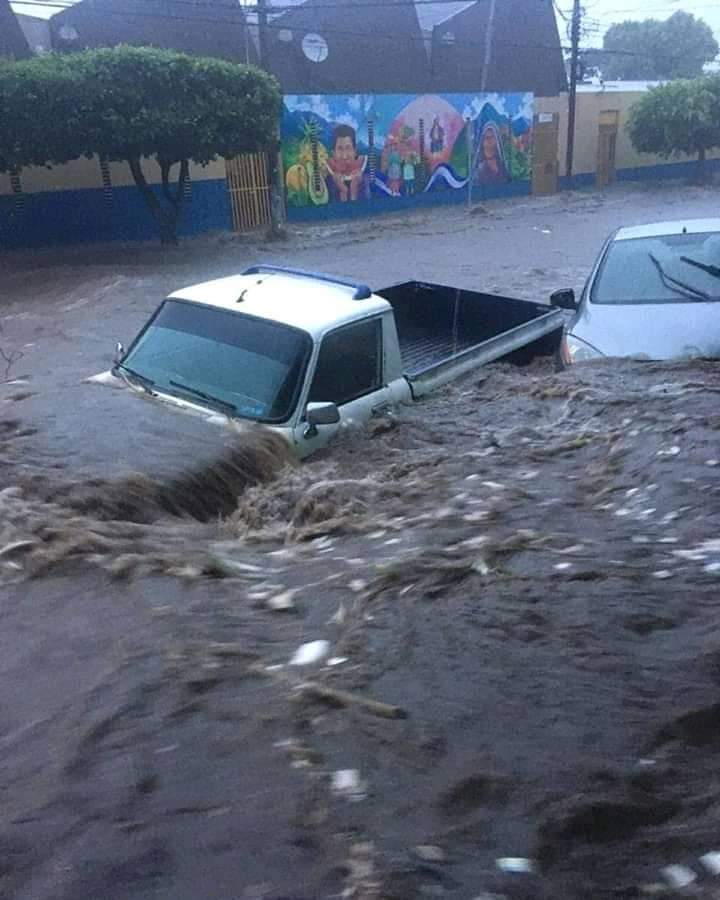 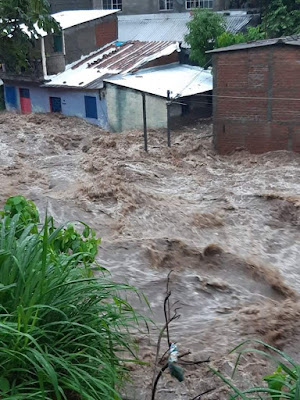 Mudslides closed the highways to the international airport and in the area of Los Chorros west of San Salvador.  Bridges were damaged in many areas.

The Las Pavas water purification plant which pumps water from Rio Lempa to communities in northern metro area of San Salvador is shut down from the storm.    No water is arriving (other than rain and flood water) to hundreds of thousands of families at a time of pandemic.

Water was released from the 15th of September dam on the Rio Lempa to relieve pressure on the dam and flood levels behind it.

The government eased some of the current quarantine restrictions in place.   Hardware stores and pharmacies were allowed to be open and to serve any customer, regardless of the last digit on their national identity card.

The executive branch asked the Legislative Assembly to approve a previously negotiated $389 million loan from the World Monetary Fund for dealing with the COVID-19 pandemic and now the impact of Tropical Storm Amanda.   The Assembly went into extraordinary session on Sunday evening.

Amanda arrived in El Salvador as the country was weathering an ongoing political storm related to COVID-19.   For six days, the Bukele government had been clashing in with the Legislative Assembly over the terms on which an extension of the State of Emergency for dealing with COVID-19 and the economy reopened.   On Saturday, the talks collapsed without an agreement.   With 56 (out of 84) votes in favor the Legislative Assembly passed its version of a new emergency law to deal with pandemic.  Bukele says he will veto it. As if to punctuate the gravity of the situation, there was the news that a reserve deputy from ARENA had succumbed to COVID-19 on Saturday.

In the height of the storm, Bukele could not set aside his animus towards the Constitutional Chamber which had ruled that one of his emergency decrees in the pandemic was void because there was not an emergency where the Assembly could not meet: 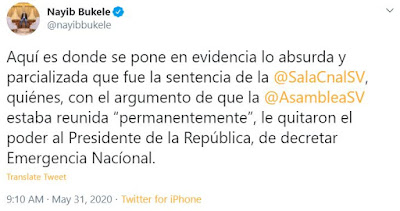 This is where it becomes evident how absurd and biased the sentence of @SalaCnalSV was, who, with the argument that @AsambleaSV was meeting "permanently", took power away from the President of the Republic, to decree a National Emergency . 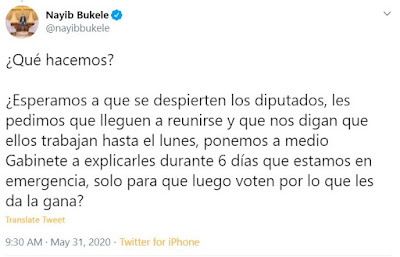 What do we do? Do we wait for the deputies to wake up, we ask them to come to meet and they tell us that they work on Monday, we put half the Cabinet up to explain to them for 6 days that we are in an emergency, only for them to then vote for what gives them the win?

On June 1, the normal protocol would include the president providing a report to the Legislative Assembly and the country on his most recent year in office. Bukele had previously announced to the Assembly that he did not want to comply until the COVID 19 emergency had ended.   First the Assembly told him he still needed to appear, but now the storm emergency has given both president and legislators grounds to postpone.

Bukele held a press conference at 9:00 on Sunday night on a bridge above Communidad Nueva Israel, one of the communities which had suffered the greatest damage in San Salvador.  After reciting the number of people killed and injured, Bukele launched into a long attack on the Legislative Assembly, claiming they were not giving him the tools he needed to address the country.


The danger continues through Sunday night into Monday according to AccuWeather: 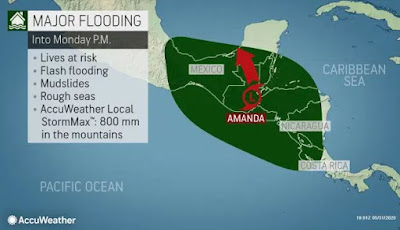