This is a blog post for people who really are data driven. The data described in this report is taken from the data provided by the government of El Salvador on its webpage at Covid19.gob.sv as updated on a daily basis. I have been tracking the data presented there since April 8, and am writing to share an analysis what can be determined and what is not yet known from that data. There is a link here to my spreadsheet where I track all this data for anyone who wants to do their own study.

Yesterday, May 9, El Salvador reported its highest number of new confirmed cases of COVID-19 – 105. The previous high was 65 on May 3, and daily new cases had exceeded 50 only one other time, with 62 cases on May 6. The seven day rolling average for new confirmed cases rose to 57, a figure which has steadily increased every day over the past four weeks.

New “confirmed” cases does not mean that 105 extra people became infected yesterday. It means only that testing detected 105 cases which were not identified the day before. It is better to have 105 new confirmed cases than to have 105 cases that exist but are not known. Confirmed cases can be isolated, can be cared for, and there can be tracing of the contacts of the infected persons to determine if they too have the virus.

An increase in the number of confirmed cases can simply mean that more tests are being performed. Yesterday El Salvador also reported its highest daily total of test results – 2011 – reporting more than 2000 tests in a day for the first time. El Salvador has been steadily increasing the daily number of test results delivered. To date, El Salvador has conducted 41,090 tests, which puts its testing in the top group for the average number of tests per capita in Latin America. This is excellent because it gives the government a better view of the spread of the virus in the country. 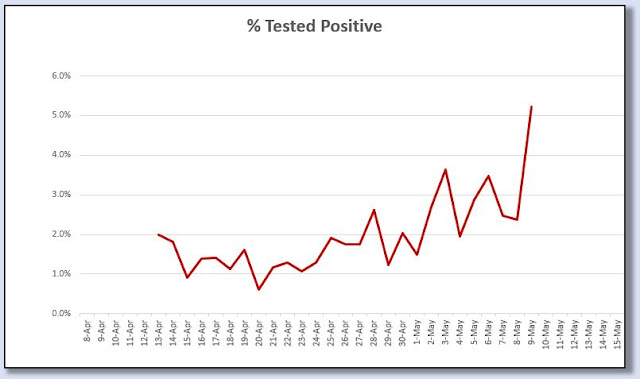 Unfortunately the government of El Salvador is not sharing much information about who it tests, where it tests, and how it tests, so it is very difficult to evaluate these figures in isolation.

17 persons have died from COVID-19 according to El Salvador’s official statistics. Using the total of local plus imported cases, this puts a case fatality rate of 1.9% on cases in El Salvador. This number is well below the global average of 6.9% and below rates for such countries as Germany (4.4%), United States (6.0%), and South Korea (2.3%). Case fatality rates taken from the Johns Hopkins Covid-19 dashboard.

El Salvador’s very good performance on the case fatality rate could reflect that its relatively high level of testing is catching many more of the asymptomatic cases of COVID-19 and thus including a higher number of cases which will not have fatal outcomes. But it is also possible that El Salvador is not recognizing groups of people who are dying from the disease and instead have other causes listed for their deaths. The proof of this would be a comparison of the total number of deaths occurring in El Salvador since the arrival of the virus in March to the average number of deaths during the comparable period in prior years. For an explanation see 63,000 Missing Deaths: Tracking the True Toll of the Coronavirus Outbreak.

There is much we don’t know. Does the number of tests include re-tests of the same individual? Who is being tested and what is the protocol for determining who is tested. How many of the positive tests are from persons who are quarantined in a contention center, how many are from persons who tested positive after presenting with symptoms. What is the geographic distribution of testing?

As of May 9, the Salvadoran government reports that 10,957 people either are confined in a contention center or have been released after having spent 30 days or more in a center. That is more than ten times the number of confirmed cases in the country, and we don’t know how many of those 10,957 became part of the total of active cases. The current total of 889 confirmed cases in El Salvador suggests that 92% of the people in the contention centers have posed no health risk to the community at large. The cost for running these centers, which are largely hotels under contract with the government, includes feeding and care and security for such centers, which, along with the prolonged deprivation of liberty of those held in the centers, needs to be weighed against the fact that only 8% of the people needed to be quarantined at all. 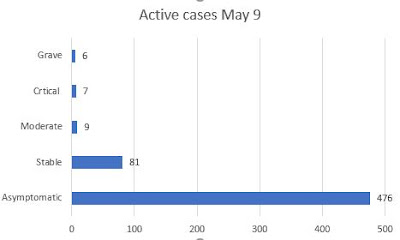 The currently active COVID-19 cases are classified by the government as asymptomatic, stable, moderate, grave or critical. Presumably, the last three categories represent the persons who require hospital care, if we assume that people with no or manageable symptoms are those who are in the asymptomatic and stable categories. For the past week, the number combined of people in the three hospitalization categories has ranged from 19 to 23 on any given day.

The government is building a large hospital at the San Salvador convention center (CIFCO) which it says will have 1000 ICU beds and 2000 regular hospital beds for COVID-19 patients. That would be 150 times more patients than the current number of patients classified as moderate, critical or grave. The impact of the pandemic would need to be much greater than the current situation in El Salvador to fill all those beds.

All of the preceding discussion depends on the credibility of the data presented by the government of El Salvador on its COVID-19 website at COVID19.gob.sv.

David said…
There's lots of evidence - from multiple press reports, anecdotal from friends, and the recent UCA survey (which, I know, is too low a number of cases to be statistically useful) - that people are getting tested and never learning the results!
8:07 PM

Gustavo Castillo said…
Excellent article. Thank you for insights.
8:46 AM