March 13, 2020
While the international press often still describes El Salvador as one of the deadliest places in the world with one of the highest homicide rates, that has not been the case for several months.   Since the middle of last year, coinciding with the start of the Bukele presidency, the homicide rate has dropped dramatically in El Salvador.

Roberto Valencia, a journalist who investigates crime and gangs in El Salvador tracks homicide statistics in El Salvador using official data from government sources.  His daily tweet shows the steady declines in daily average homicides to this point in 2020 when the rate is between 3 and 4 per day.    Compare that to 2015, the bloodiest year since 2000, when the daily average homicide rate was 18.   So the homicide rate has declined by as much as 80% from those heights. 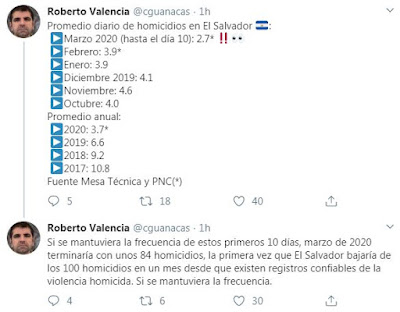 With this improvement, San Salvador no longer ranks as the most dangerous capital city in the Americas, instead it ranks sixth behind Caracas, San Juan, Panama City, Tegucigalpa and Guatemala City. Forty-five of El Salvador's 262 municipalities have reported zero homicides in the past 13 months.  In another important data point, the number of Salvadorans reporting that they or someone in their family has been a crime victim in the previous three months is steadily trending downward.


El Salvador is a safer country since President Nayib Bukele came to power in June 2019. It is a fact. It is incontestable. And we must also say that it is not a little safer, but much more, much more than this journalist came to imagine possible. In fact, it must be said that things improved almost immediately, in a sustained way and with increasing depth...El Salvador is, today, a country where its inhabitants are killed less. There are even days, ever more frequently, where we don't kill ourselves.

But as Martinez notes, the puzzling question remains, why has the homicide rate dropped so significantly?   He and other expert observers discount the idea that Bukele's Territorial Control Plan is the reason.   The plan, in the form of a "super mano dura" or "extreme firm hand", relies on heavily armed troops, raids and round-ups.   It has all been tried before with the same personnel and the same tactics.  Just better filmed and better tweeted this time as Martinez notes.

Martinez recounts a conversation with a source within El Salvador's gangs, a leader of high rank.   This leader tells Martinez that there is no truce agreement with government involvement as there was in 2012.  Killing just isn't a priority for the gangs right now.   Martinez finds himself left with more questions than answers.

In an op-ed in the Washington Post last October, Roberto Valencia wrote:


After having gone to the communities and interviewed officials, and a veteran gang member off the record, the collapse in homicides - deeper in cities with broad and rooted control of the gangs - is best explained as a conscious decision made by the criminal structures to keep homicides to a minimum as a strategy not to heat up their territories and justify further reprisals, as a gesture of 'goodwill' towards the president, and to make it clear that the chiefs of the main gangs still keep their clicas under control in the face of what might come next.

An article in Insight Crime from January includes another perspective:


Mario Vega, a prominent pastor who has worked extensively with the country’s main gangs — the MS13, Barrio 18 Revolutionaries and Barrio 18 Sureños — described the Territorial Control Plan as a “tool for publicity,” with “no innovations” compared to the hardline policies of previous governments. He told InSight Crime that El Salvador’s reduction in homicides is rather part of a region-wide behavioral change which has seen gangs in the so-called Northern Triangle countries of El Salvador, Guatemala and Honduras unilaterally decide to cool down killings, which in turn has driven down the homicide rate across the region in recent years.

There is another broad discussion on this topic on the Revista Factum podcast: Pelo en al Sopa from December 20, 2019.

Thus we have indications that the dramatic drop in homicides comes from an initiative of the gangs themselves and that the Territorial Control Plan in its public expression of militarized policing is not the cause.   This leads some to say that president Nayib Bukele should not get any credit for this great news.  I would not go that far.  The fact remains that, although homicides had declined each year from their peak in 2015, this dramatic reduction commenced only with the arrival of Bukele in office.  If the gangs have decided that murders are now bad for business, or have decided that they like this young new president and wanted to give him a gift, Bukele should get some credit.  He just won't take the credit in that fashion, because it would not be correct public relations to say "the gangs like me."  Bukele will always prefer to burnish his tough image tweeting "the gangs hate me."