March 23, 2020
A  guest post from Carlos Colorado, author of the Eminems Doctrina and Super Martyrio blogs. 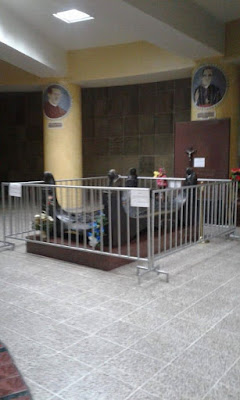 In March 2000 I was in El Salvador for what was then the 20th anniversary of Archbishop Oscar Romero’s assassination—the halfway point between the 1980 killing and the 40th anniversary we commemorate this year. At a reception in a trendy boarding house in western San Salvador, I brashly suggested to the guests that Romero could become El Salvador’s Socrates—who was forced to drink poison by fervid Athenians, but was later embraced by the city as its most quintessential son. It fell to the late, legendary NCR correspondent Gary MacEóin to let me down gently, explaining that the entrenched hostility toward Romero from the powerful meant that he would be persona non grata to the political establishment indefinitely.

Of course, MacEóin was right about the elites; Romero is “not a saint of their devotion”—as the Salvadoran expression goes—to this day. But many things were already changing by the year 2000 and many more things have changed since, to make Romero’s remarkable rehabilitation possible. While Romero’s memory was suppressed in El Salvador during the 80s and 90s, it was kept alive abroad with glowing biographies and film portrayals, including Oliver Stone’s “Salvador” (1986) and the modest indie pic “Romero” (1989). In 1990, the church opened its sainthood investigation, but it seemed as if, for the rest of the decade, that project was shelved.

While Romero’s sainthood file gathered dust at the Vatican, on the streets his image was ascendant, with larger and larger commemorations of his March 24 anniversary each year, not only in San Salvador, but also in London and Rome. Things began to change in official circles in El Salvador in 2004, when Tony Saca, who had been an altar boy for Romero, was elected president. Although a member of the party founded by the man thought to have ordered Romero’s assassination, Saca petitioned Pope Benedict XVI to permit Romero’s sainthood cause to advance. But the real sea change came with the 2009 election of Mauricio Funes, the first leftwing president, who promised to make Romero the moral compass for his government. Funes named a new traffic artery after Romero, renamed the airport after Romero, and installed a heroic painting of Romero in the presidential mansion’s great hall.

Perhaps the largest transformation occurred in 2015, when Romero was beatified in El Salvador, showing the country how admired he was when hundreds of thousands turned out for the large-scale spectacle. The church made a concerted effort then to educate the population about Romero. Many read his homilies and learned about his actions and actual views for the first time, often refuting what they had heard in official disinformation. There were many who actually believed Romero had materially assisted the guerrillas, supplying arms and openly espousing Marxist propaganda. The publicity campaign and educational effort that accompanied the beatification helped to blunt extreme views.

Ultimately, Gary MacEóin was right, though, that Salvadorans would not be ready to buy into Romero’s message. With all of the 40th anniversary commemorations, including an emblematic candlelit street procession, cancelled due to Coronavirus, this anniversary will be very reminiscent of the first ten years when Romero memorials were banned. This year, instead of public memorials, Romero devotees are being asked to light candles at home. Indeed, it appears that in El Salvador, Romero is “hidden in plain sight.” That is, he is everywhere: his name is at the airport, on the roadway artery, and his image is in the presidential state room and in street murals all over the country. But the current generation, including the new millennial president, find the most universal Salvadoran a stranger they do not know.

In a sense, the muted Romero commemoration will be the most faithful to the spirit of the man. Just when it seemed he was in danger of becoming “another little wooden saint” (as activists feared he would become), Romero is again associated with austerity, sacrifice and restraint. I suspect he would not want it any other way.