March 09, 2020
The president of El Salvador, Nayib Bukele, continues to have very high approval ratings among members of the public in this country.  This popularity persists even after he took the step on February 9, unprecedented in peacetime El Salvador, of entering the chambers of the Legislative Assembly escorted by armed soldiers to pressure legislators to approve a loan package.

That was an action widely criticized by the international community and by the "elites" of the political class in El Salvador.  But Bukele's actions on February 9 appear not to have damaged his popularity and approval ratings among the vast majority of Salvadorans. Since then, two public opinion polls were released which asked respondents about Bukele's administration and their perception of "9F".

In a poll by La Prensa Grafica, 85.9% of respondents greatly approved or somewhat approved of Bukele's performance in his first nine months in office.  On a scale of one to ten, his rating was 7.9, only slightly below the 8.1 rating he had on entering the presidency.  It is a rating higher than his three most recent predecessors ever achieved. 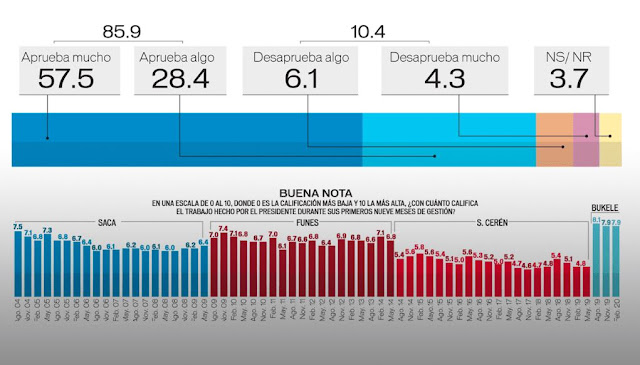 The poll results from Disruptiva at the University Francisco Gavidia found that 78.6% of Salvadorans believe that Bukele's Territorial Control Plan has resulted in a decline in El Salvador's homicide rate.  As a result, they side with Bukele when he says he needs a $109 million loan package approved to further that Plan.   The Disruptiva poll found that 79% approved of Bukele's actions on February 9 when he entered the chambers of the Legislative Assembly. 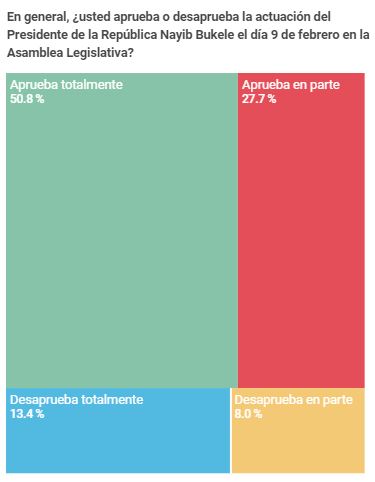 The high approval ratings seen in these polls could well turn into strong majority votes for Bukele's party Nuevas Ideas when the country holds national elections in February 2021. 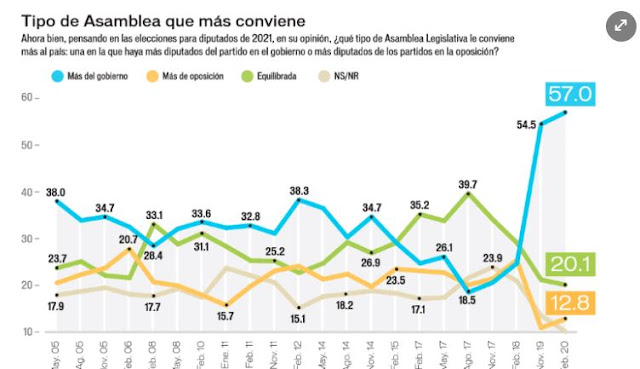 From the time he was mayor of San Salvador, Nayib Bukele has been El Salvador's most popular politician.  That popularity persists even with his ill thought out actions on February 9.   Perhaps the best way to understand this is to realize that the public measures Bukele against the old guard politicians who fill the Legislative Assembly and the leadership of ARENA and the FMLN.  These are the politicians whom Bukele characterizes as "los mismos de siempre," the ones who are same as always.  Because that bunch has shown itself to be prone to corruption, inefficiency, and nepotism, Bukele ends up looking pretty good in comparison.   Only when the opposition comes up with a credible new generation of political leaders, from the right or the left, will the public have a reason to compare Bukele and perhaps recognize some flaws.