The vote of the Salvadoran diaspora 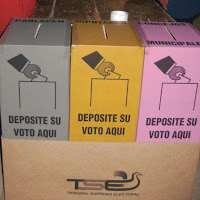 Thursday El Salvador's Legislative Assembly voted to override a veto from president Nayib Bukele and approved a measure expanding the ability of Salvadoran citizens living outside of the country to vote.  Previously Salvadorans in the diaspora could only vote in presidential elections.   Now they will be able to vote for deputies in the Legislative Assembly and members of municipal government as well.

The expansion of the vote was necessary to comply with a prior ruling of the Constitutional Chamber of El Salvador's Supreme Judicial Court.

The idea that a Salvadoran citizen living in Toronto, Canada for the past thirty years should be able to vote for the mayor of the town of Suchitoto and legislative deputies from the department of Cuscatlán, is not immediately obvious. Yet if that Salvadoran residing in Canada shows she has ties to Suchitoto, that is now her right.

The new law requires Salvadorans to enroll to vote in a municipality by showing that they have roots there, through the presence of relatives there, or by ownership of property or a business in that municipality.  These links to a local government must be shown in a form sworn to and certified by an attorney and then mailed to El Salvador no later than August 28.   Casting votes will be through a mail in ballot and not through online voting.

It might seem strange that Nayib Bukele would have vetoed a law for voting from outside the country.   He enjoys very strong support in the diaspora and can count on votes in the upcoming 2021 elections.   Bukele objects primarily that the new law does not make remote voting easy enough.   The requirement of a sworn and certified statement  about roots in a municipality will surely dissuade many from taking the necessary steps to register.   A mail-in ballot is more cumbersome that simply marking an online ballot.   For Bukele, the Assembly has placed too many obstacles in the way of the right to vote.

In prior presidential elections where the diaspora has had the right to vote, only a very small percentage of eligible voters enrolled and cast a ballot.  It seems reasonable to assume that trend will continue in light of the hurdles which voters still must overcome.   The Legislative Assembly achieved its goal -- it expanded the vote and so complied with the ruling of the Constitutional Chmaber, but it did so in a manner to minimize how much the expansion will aid Nayib Bukele as he seeks to have his Nuevas Ideas party become the new force in the legislature and local government.