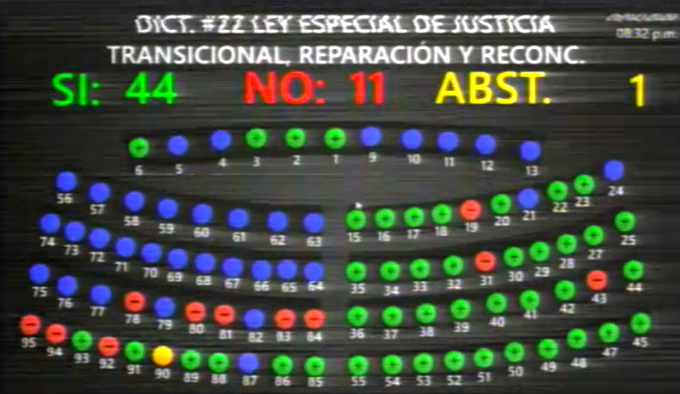 Last night El Salvador's Legislative Assembly passed a "national reconciliation law."   The purpose of the law is to comply with a dictate of the Constitutional Chamber of El Salvador's Supreme Judicial Court which repealed a 1993 amnesty law protecting all perpetrators of crimes, including crimes against humanity and other war crimes, from the civil war period.

The new law was passed with 44 votes in favor, one more than the 43 necessary in the 84 member legislature.   The support came from the conservative ARENA party which has a plurality in the Assembly and its conservative allies, PCN and PDC.

As the Assembly gathered yesterday for an extraordinary session in the evening, President Nayib Bukele promised in a tweet to veto the law.  The approval of a national reconciliation law, despite criticism by victims and human rights groups, hands president Nayib Bukele the opportunity to portray himself as champion of victims through the exercise of his veto power.

Arnau Baulenas Bardia, coordinator of the judicial process team, at the Human Rights Institute of the UCA, would not join groups urging Bukele to veto the law for human rights reasons.  He writes in an opinion piece in El Diario de Hoy:


Because of his words and actions, the only thing that matters to the President is his image so he can win the maximum number of votes and gradually gain control of the three powers of the State. In other words, he is one who is very undemocratic and very similar to what we call in other countries a dictatorship. We cannot ask someone who always makes interpretations of the Constitution in his own interest to be the guarantor of the Constitution and to determine if the articles of the Law guarantee a minimum of rights in favor of the victims, when his actions diminish the victims. It would be a paradox to speak out against [Bukele's entrance into the Legislative Assembly with armed troops on February 9], his abuse of power and his acting outside the Constitution, and at the same time to ask him to interpret a law of such great importance for national reconciliation.

If your goal is to get rid of this new law, however, I would argue it is better to have Bukele veto it, than to assume that the Chamber will overturn the law. The Chamber is made up of judges picked by the same Assembly which passed the law.  This is not the same Chamber of famously independent judges who in 2016 overturned the original amnesty law.  The outcome of a follow up proceeding in the Chamber is not certain.

It is also not certain what happens next if Bukele vetoes the law.   The Legislative Assembly and Bukele will not have complied with a court order that a new law be passed by February 28.   But what can or will the Constitutional Chamber do about it?

The victims and their families are also losers in this battle.  A veto of the law eliminates the amnesty-type provisions to which they objected, but also eliminates important initiatives such as reparations, search for the disappeared, an historic memory commitment, psycho-social care and more (although funding was left to the vagaries of future government budgeting processes).   Now those initiative won't progress at the governmental level unless a new law is passed.

Where does El Salvador stand today with respect to impunity for crimes committed by the forces of the army and the guerrillas?  Thousands of troops are in the streets of El Salvador (and recently in the halls of the legislature) while the country cannot decide what to do about the crimes committed by troops in the streets thirty or more years ago.  Not much changes.
History Human Rights Impunity Nayib Bukele