Latest attempt at a reconciliation law does not satisfy victims 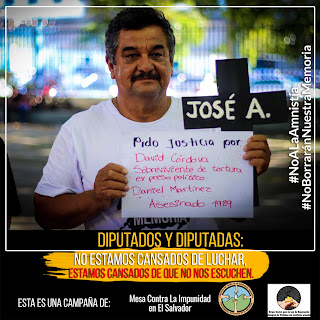 El Salvador's Legislative Assembly is making another attempt this week to pass a new national law of reconciliation, 28 years after the end of the country's bloody civil war.  The proposed legislation is a measure which critics label as continuing impunity and a form of amnesty in fact for perpetrators of crimes against humanity, drafted without giving victims and their representatives access to the language of the proposal.

A reconciliation law is required by a 2016 decision of the Constitutional Chamber of El Salvador's Supreme Judicial Court which overturned a blanket amnesty law passed in 1993.  The 1993 law had granted broad amnesty for all crimes, including crimes against humanity and war crimes, committed during the country's 12 year civil war.  In its 2016 decision, the Constitutional Chamber required the Legislative Assembly to pass new laws to provide for post war reconciliation, taking into account victims' rights under international human rights norms.  Yet in almost four years since, the politicians have been unwilling or unable to come up with a new law which meets international human rights standards.  The current deadline for the Legislative Assembly to pass such legislation, after already receiving two extensions from the court, is Friday, February 28.

The Legislative Assembly first attempted to pass a National Reconciliation Law in May 2019.   That draft appeared to have the backing of the both ARENA and the FMLN and a probable signature by president Sánchez Cerén if the measure reached his desk before he left office on June 1.   But overwhelming opposition by human rights groups, civil society, universities, the Catholic church and incoming president Nayib Bukele led to the measure stalling at the last minute.

When the legislators returned to the task last November, their development of a new draft of the law was again roundly criticized by victims and human rights organizations.   The Legislative Assembly did not move the bill forward but instead asked for a second extension, which now expires in four days.

On Friday, a broad coalition of human rights groups issued a call for the Legislative Assembly to put a halt to its development of a law to be voted on this week since proposed drafts had not been shared with representatives of the victims' whose rights are being impacted. 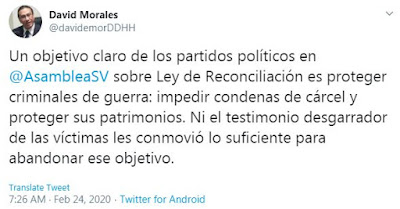 A clear objective of the political parties in the @AsambleaSV regarding the Reconciliation Law is to protect war criminals, blocking prison sentences and protecting their assets.  Not even the piercing testimony of the victims moved them sufficiently to abandon this objective.

Finally, today the newest draft of a reconciliation law was made public, and the president of the Legislative Assembly, Mario Ponce, made a presentation of the Reconciliation Law project to the international diplomatic corps in the country.

The draft, in my opinion, is a step in the right direction from the first three drafts.   It has sections dealing with the establishment of a national council for reparations, measures for historic memory, a reparations fund for victims, and additional authorization for a commission to search for those disappeared during the civil war.

Victims groups appear to be most concerned, however, about the possibility of provisions which would allow perpetrators of crimes against humanity to receive sentences which are not proportional to the gravity of their offenses, or to have their sentences commuted altogether.  Other concerns involve a limited period created in the law for the attorney general's office to investigate all potential cases and decide if they should be brought to trial.

If the Assembly does pass the measure this week, victims have been calling on president Nayib Bukele to veto it.

As the Assembly and Bukele consider this attempt at national reconciliation, they would be wise to consider the words of José Zalaquett, a Chilean lawyer who investigated human rights abuses during Augusto Pinochet’s regime, and who died earlier this month.  From Zalaquett's obituary in the New York Times:


“Every step of this transitional process takes on symbolic value and has lasting effects,” he said. “Truth is important. Justice is important. Forgiveness is, too.”

But he did not favor blanket amnesty for those who had committed abuses, as some of Pinochet’s supporters urged.

“The individual must atone for sins that have been committed and make reparations,” he said. “In this manner, it is as if the sinner is putting back the brick he took from the moral building.”

A blanket amnesty without this acknowledgment “only serves to validate human rights abuses,” he said.

“There is no truth, no repentance — just cynicism.”