Witness to the truth

November 15, 2019
When soldiers from El Salvador's military massacred six Jesuit priests and their co-worker and her daughter, there was an immediate attempt to cover it up and to suggest that the killings could have been done by FMLN guerrillas.

But there was a witness, Lucia Barrera de Cerna, whose testimony made it impossible to avoid the truth, despite the best efforts of the Salvadoran government and the FBI.

From her testimony described in "The Jesuit Murders: A report on the testimony of a witness," by the Lawyers Committee for Human Rights, 15 December 1989, Lucia and her husband Jorge Cerna lived in Soyapango, a suburb on the opposite side of San Salvador from the location of the UCA.  She had a cleaning job at the university.  Because of the intense fighting in greater San Salvador during the November 1989 FMLN "final offensive", Lucia asked one of the Jesuit priests, Father Ignacio Martín-Baro´, if they could stay with their 4 year old daughter on the campus of the UCA as a safer location.  Martín-Baro´ agreed that they could stay in a small house behind the pastoral center.

At around one in the morning on November 16, Lucia and Jorge were awakened to the sound of gun shots and banging.  She peeked through the window and saw soldiers in camouflage uniforms and carrying rifles like those she had seen on the streets of the city.   Around the same time she heard Father Martín-Baro´ shout "Esto es una injusticia!  Esto es una carroña!" ("This is an injustice! This is an abomination!").   She heard more shots and crashes and men running.

Lucia would later share what she had seen with the Jesuit leadership in El Salvador and provide a sworn statement, a key piece of evidence since the military was blaming the guerrillas.  But coming forward in this way, immediately put the lives of the family in danger, and they needed to quickly leave El Salvador for somewhere they could be safe.

The Lawyers Committee Report also describes US actions on learning there was a witness who saw Salvadoran soldiers at the time of the massacre.  To get Lucia and her family to safety out of the country, they were flown on a French government plane to Miami.  In Miami, the Jesuits had arranged for Lucia to be sheltered in safety by the Jesuit community there.   A US official named Richard Chidester persuaded the Jesuits to allow him to accompany Lucia on the flight to Miami, supposedly to smooth out immigration issues.   But when they arrived in Miami, instead of going to the Jesuit residence, the family was taken to a Miami hotel.  The FBI told the Jesuits this was for the family's safety while they did a risk assessment.  While the State Department and FBI kept Lucia and her family at the hotel for ten days, they proceeded to interrogate Lucia and Jorge and subject them to polygraph tests.   After days of harsh interrogation by FBI agents and a Salvadoran military official, Lucia thought they did not believe her, and to end the process changed her testimony and said she had seen nothing.

The fact that she had recanted was promptly leaked to the Salvadoran government which used it to support its defense of non-involvement in the massacre.  The truth of the massacre, and the resurrection of Lucia's testimony, would come in the form of a US Congressional investigation led by Massachusetts Congressman Joseph Moakley.   You can review Moakley's files regarding Lucia and a transcript of her testimony before Congress here.

Five year ago, on the 25th anniversary of the massacre, a book came out with Lucia's story, including her life before the killings, the night which changed her life, and the aftermath.  It is written by Mary Jo Ignoffo as told to her by Lucia.   The book, published in English is titled La Verdad: A Witness to the Salvadoran Martyrs.  The book is now available in Spanish, and Mary Jo Ignoffo was at the UCA to present the translated version and to deliver all her recordings of interviews with Lucia for the archives of the UCA.


You can watch Lucia today in this BBC video:

NPR has a current interview with Lucia here.

For the 25th anniversary, Lucia was also interviewed by RevistaFactum, and her story in Spanish is available here.

UPDATED as of November 17 to correct several name misspellings and added links to the BBC and NPR items. 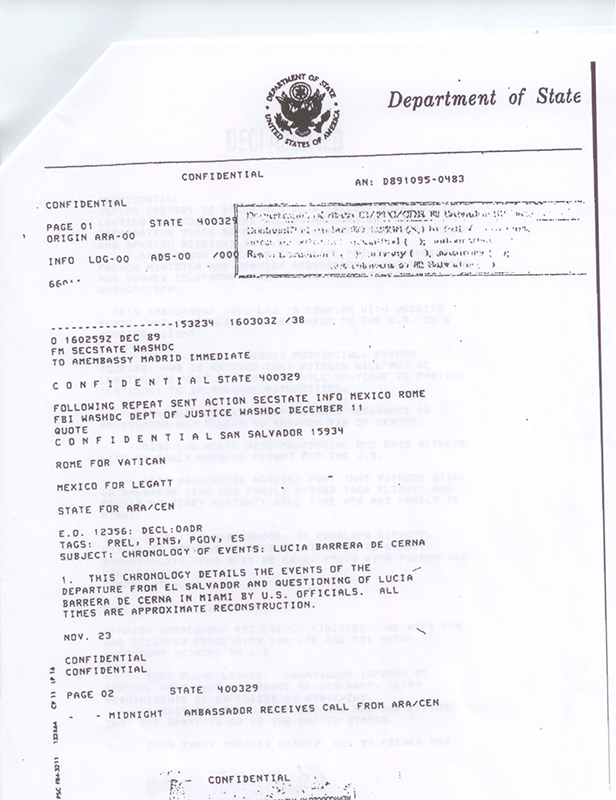