The dismissal of a case of child sexual abuse committed by a sitting judge in El Salvador has rocked the country.   It appears that just about every sector of society is outraged at the appearance that judges in El Salvador are protecting their own, and not protecting the most innocent of victims.

The case involves Salvadoran magistrate Eduardo Jaime Escalante Díaz, 50 years old, who was accused of sexual assault of a child.   Specifically the allegation is that he enticed a 10 year old girl on the street to approach him and then touched her genital area before fleeing after a neighbor shouted at him.

The Legislative Assembly revoked Escalante's judicial immunity from suit so that he could face justice in a criminal court.   Last week, that court ruled that a criminal case against Escalante could not proceed.  The court ruled that the proof provided by the prosecutors was insufficient to establish the crime they had charged against Escalante, "sexual assault of a minor" as defined by El Salvador's Penal Code.  The court said, however, there was sufficient evidence of "impudent touching" which is an offense against public decorum, but only punishable with a fine, not with prison time.

Attorney General Raul Melara announced that his office would appeal the decision.

Advocates for women and children quickly organized demonstrations in front of the courts complex to protest what they saw as a culture of impunity protecting men in power who abused children. 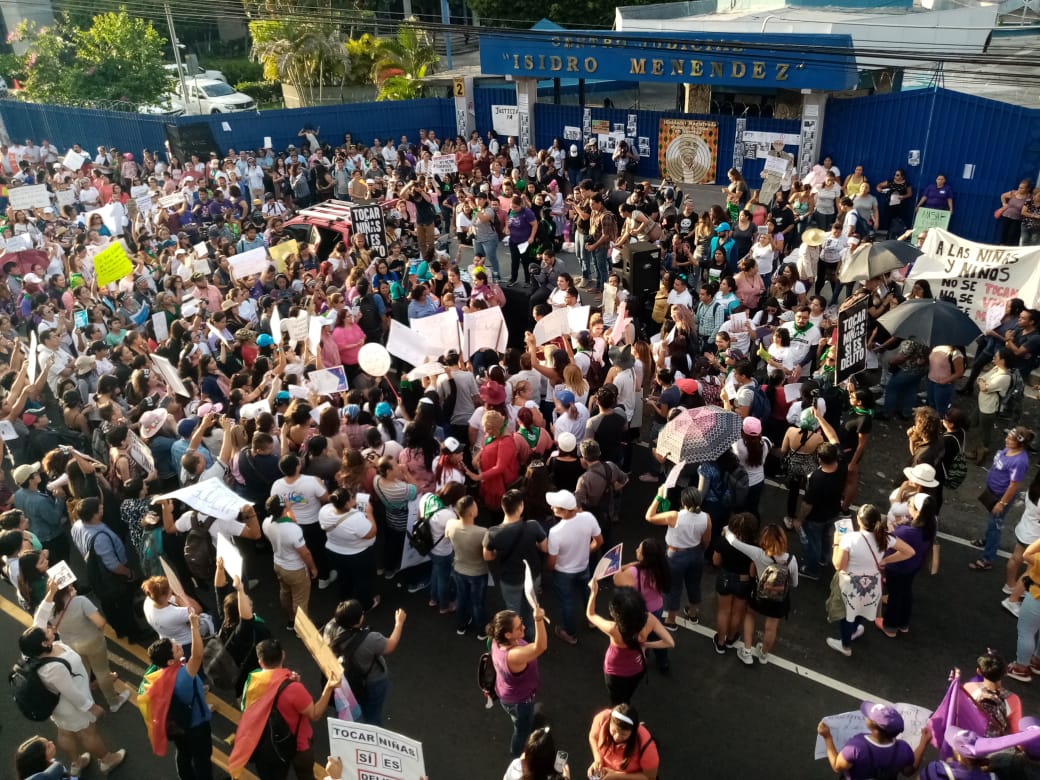 There is a photo gallery of the protests here from ContraPunto..

The reaction was also swift and furious on social media. Using a variety of hashtags including #TocarNiñasSiEsDelito (Yes, Touching Girls is a Crime), twitter users poured out outrage at the magistrates of the criminal court and at Escalante.

President Bukele got involved as well, including a tweet which promoted the demonstration outside of the judicial complex and announcing that he would have 100 female police agents deployed to provide security.

And while the court is correct that judges should be independent and free from political pressure, that does not lead to the conclusion that everyone from mothers in the street protests to the president of the Republic may not express their opinions.  They may shout (and tweet) forcefully that the court simply got it wrong when it said a 50 year old magistrate could entice and touch a ten year old girl sexually and not commit a crime.   Being independent does not mean being free from criticism.

Deputies from the major political parties introduced legislation to make "impudent touching" of a minor a crime punishable with years in prison rather than a fine.

This case comes amid growing awareness that El Salvador does much too little to protect its girls from predatory males.  According to statistics from El Salvador's Ministry of Health, 781 girls 14 and under became pregnant in 2017, including 46 between the ages of 10 and 12.  This number is down from 1,437 in 2015, but is still much too high according to the Ministry of Health and any other compassionate observer.

As the report notes, any pregnancy of a girl that young is the result of rape.   But the Salvadoran criminal justice system is inadequate when it comes to crimes of sexual violence.   In 2017, for the 781 pregnancies in girls 14 and under, there were only 63 criminal complaints initiated.   And on average, only 10% of complaints of sexual violence result in convictions.