Good news, but why? 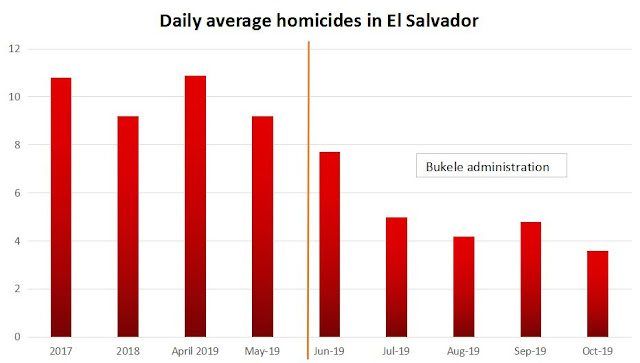 El Salvador has good news to celebrate as November begins.   The month of October closed with a post-war record low number of homicides according to official statistics.

As shown in the chart above, the average number of Salvadorans killed in acts of violence has dropped from 9-10 per day to an average below 4 in only five months.

President Nayib Bukele has been quick to take credit for the improved statistics:


We are able to confirm that October 2019 has become the month with the least homicides since the Peace Accords...
.... 112 total homicides.   Leaving August 2019 in second place with 130 and september 2019 in third place with 143.
The first 3 places are occupied by months which have happened during our Government (that has only been in place for 5 months).

A reduction in the level of homicides is certainly positive.   The question, however is why have those rates fallen rapidly?

This is the question raised by Salvadoran crime reporter Roberto Valencia in an opinion piece published in Spanish in the online edition of the Washington Post.   Can it all be due to the #PlanControlTerritorial security measures rolled out by Nayib Bukele?  Valencia thinks not, pointing to the fact that Bukele's hard line policy differs little from mano dura policies rolled out during previous governments of the right and left to great fanfare but with little lasting success.

Can it be the result of an under-the-table negotiation between Bukele and the gangs?  This is suggested by some of Bukele's opponents.    But Valencia says the hard-line tactics of Bukele are inconsistent with having reached another "tregua" in which gang members get better treatment in return for lowering the murder statistics.

According to Valencia, the more likely answer is that the reduction in homicides represents a unilateral decision by the gangs:


After having gone to the communities and interviewed officials off the record, and a veteran gang member, the fall in homicides - deeper in cities with broad and rooted control of the gangs - is best explained as a conscious decision made by the criminal structures.  Keeping homicides to a minimum as a strategy not to heat up their territories and justify further reprisals, as a gesture of 'goodwill' towards the president, and to make it clear that the leaderships of the main gangs still keep their clicas under control for what could come after.

One thing El Salvador knows, the gangs can be responsible for dramatic changes in the homicide rate.  When the gangs reached a truce among themselves and the Mauricio Funes administration in 2012, homicide rates took an immediate and dramatic drop of more than 50%.   The homicide rates during the high point of the tregua were only slightly higher than those rates seen in the past few months. Then as now, El Salvador celebrated the occasional day when no one was murdered in the country.  So whether it is a negotiated truce, or a unilateral political decision by the gangs, a decline in homicide rates by itself does not indicate that the gangs have been weakened.

Many of those missing persons will never be found, with their bodies tossed into clandestine mass graves or abandoned wells.  Their numbers would make a true homicide rate in El Salvador higher than the official one.

Don said…
This is laughable. Let me get this straight: The gangs have unilaterally decided to stop being violent??? At this point I'm just following this blog to see the kind of denial that people are living with.
9:35 AM

Don said…
Also, the disappearances that police never find, would also make the previous years' rates higher as well. So, even if you consider disappearances, then there is still a significant drop, because people were being disappeared previously, too. It's not like the gangs just decided to hide the bodies better, now.

If disappearances were an actual rebuttal to Bukele's strategy, then why would journalists concede that there is less gang violence (but that is just because of a unilateral gang decision). Also, this guy interviewed one gangster to make his decision (the one old gangster that everybody interviews and says the same thing every time). I guess that constitutes hard hitting investigative journalism.

The actual situation is that previous administrations never made sure that there was a constant police presence in violent communities. They just did it for a few days for the press, and then they left the communities to their own fate. This government is actually following through on its promises, and it is delivering results. The gangs and the english speaking press just can't bring themselves to admit it.
9:45 AM

Don said…
Also, if the gangs decide to stop being violent in order to avoid police attention and to avoid represalias from the government, then that can't be considered a unilateral decision by the gangs. That should be viewed as a result of the security plan. without the security plan, then the gangs would not try to reduce violence in order to avoid confrontation with the police and government. As far as I can see, that is the main point that can be taken from most of Roberto Valencia's recent reporting on this issue.