Wages are low.  The average earnings in El Salvador according to the EHPM are $327 per month.  The average worker in El Salvador has finished only 8.5 years of school, a figure which has only improved one grade level in the past 10 years.  Thousands of Salvadorans continue to attempt to migrate to the US every month.

26.3% of Salvadoran households are in a condition of poverty and 5.7% live in extreme poverty.

Economic growth which might improve the situation has been steadily slowing since the first quarter of 2018 according to a September 2019 report on the economy by El Salvador's Central Reserve Bank: 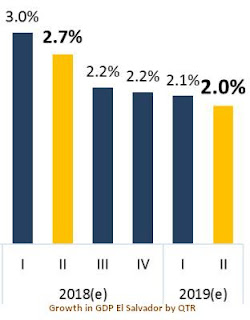 Faced with these economic challenges, the government of Nayib Bukele has hoped in its first six months to make progress on a number of fronts.

The government is openly courting US business interests with a very pro-US foreign policy. The government points to new investments by Chevron (port facility improvements) and Wal-Mart (new store in Santa Ana) as the first fruits of this work.  Amazon announced that it will open a center in El Salvador to offer training and certification in Cloud Computing Services.

Tourism jobs are being promoted through the Surf City initiative.

Infrastructure projects have been initiated including a traffic by-pass around San Miguel and the concluding leg of a highway to and around La Libertad.  On November 26, the Central American Bank for Economic Integration announced a financing package of almost $250 million for highway infrastructure to widen the Pan American highway including building a viaduct at the traffic chokepoint near the Los Chorros tourist center.

The government is also trying to facilitate investment and business formation through regulatory improvements designed to make doing business in El Salvador easier.

The current minimum wage in El Salvador is approximately $300 per month in the service, commercial and manufacturing sectors and $200 per month in the agricultural sector.   Last week the government launched a National Council on the Minimum Wage with representatives from business, labor and government to work towards an increase in the minimum wage.  Bukele stated his hope for a wage increase reached by consensus of all involved.

Perhaps the biggest spur for the Salvadoran economy may be the current sense of optimism in the country about its current trajectory.

While these initiatives and optimism should push the economy in a positive direction, there are several countervailing forces.   The poor quality of El Salvador's schools and the low level of educational attainment makes it difficult to attract business with higher paying jobs to locate in the country.

El Salvador is very exposed to international economic conditions and it would not be immune in the event of a worldwide economic downturn.  An economic downturn in the US would also threaten remittances and export purchases from El Salvador's largest trading partner.

Deportations from the US increase the population looking for jobs.  If the US Supreme Court upholds the termination of TPS and DACA, deportations will increase further, and family remittances which are a key economic force in El Salvador, will decline.

Changing El Salvador's economic prospects and improving the lives of millions of Salvadorans will not happen quickly.  Most of all, such change requires an investment in El Salvador's people and identification of how to grow sectors of the economy which will sustain family-supporting employment and be environmentally sustainable.   It requires a commitment to an economy which benefits more than a small powerful business class.     It's too early to know if such change is starting to happen in El Salvador.