Celebrations of 30th anniversary of the UCA martyrs 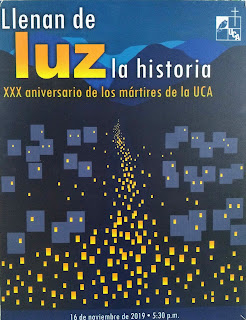 The 1989 massacre of six Jesuits priests and their coworker and her daughter was commemorated this weekend in El Salvador.  Two weeks of events led up to anniversary date of November 16, including lectures on the legacy of the martyrs of the UCA from Father Jose Maria Tojeira,S.J. Father Jon Sobrino,S.J. and Cardinal and Jesuit Micheal Czerny.  There was a forum on the ongoing search for persons who were forcibly "disappeared" during the civil war, and US Congressman James McGovern spoke of the need for ongoing commitments to justice in both El Salvador and the United States.

The university unveiled a new mural dedicated to the martyrs, and the traditional candlelight procession wound its way through the streets of the campus where colorful salt carpets (alfombras) had been created hours earlier.

Here is a sampling of English language coverage of the anniversary of the Jesuits massacre and its relevance today.