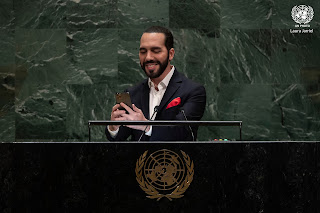 Nayib Bukele traveled to New York City at the end of September to speak at the United Nations General Assembly where he also met with US president Donald Trump.   The trip reflected the priorities of the millennial president of El Salvador, but received a mixed reception in the country.

Bukele's speech was an exercise in brand-building.   He took to the dais at the UN General Assembly in his trademark suit with open collar shirt and red pocket handkerchief.  The young millennial, social-media-savvy president opened his speech by taking a selfie of himself, and then telling the General Assembly that his selfie on twitter (hashtag #UNselfie) would be seen by many more persons world-wide than would be the speeches of other world leaders in New York last week.   He referred to the UN as stuck in old ways of doing things when the internet and social media had transformed how the world operates.


“Believe me, many more people will see this selfie than will hear this speech,” Bukele quipped before delivering his address calling on the United Nations to change with the times and for world leaders to do more to connect with their countries’ youth.

The former mayor of the capital, San Salvador, who took office in June, is a prolific user of social media. In his speech, he attributed his election victory to his mastery of platforms like Facebook Live, which he said his political opponents did not fully grasp. 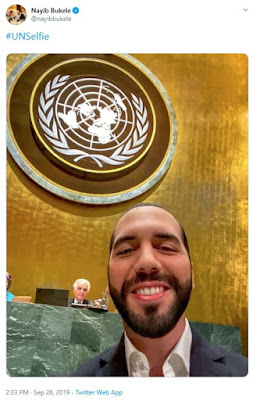 You can watch a video of Bukele's entire speech to the UN General Assembly with English translation. (original Spanish here)

While at the United Nations, Bukele met with Trump.   Before the meeting, the two heads of state spoke with the press, and Bukele described his perspective:


We're hoping that this meeting will only strengthen our relationship even more, and I think it will because, you know, President Trump is very nice and cool, and I'm nice and cool, too. We both use Twitter a lot, so, you know, we'll get along.

You can watch a  video of Bukele and Trump's remarks before their bilateral meeting.  (Most of the video actually involves Trump swerving off into a diatribe against Nancy Pelosi and the Democrats and the current impeachment inquiry).  The White House also released a transcript of their remarks.


Following his meeting with Trump, Bukele appeared on FoxNews:

In the FoxNews interview, Bukele was asked what El Salvador had gotten in return for signing the recent asylum cooperation agreement.


Q "What did you get [for signing asylum agreement]?"
Bukele: "We're not getting anything.

This answer was consistent with a theme of Bukele repeats, that in dealing with the US that he does not want US aid dollars, but wants US business deals and trade.

Bukele also acknowledged that El Salvador had not received assurances that Salvadorans with Temporary Protected Status (TPS) living in the US would be allowed to stay:


Q "You have not received any assurances?"
Bukele:  "No, of course not."

A few small fruits of El Salvador's diplomatic and public security efforts did appear this week.   The US State Department lowered its Travel Advisory level for El Salvador from "3-Reconsider Travel" to "2-Exercise increased Caution."   Bukele had sought this change arguing that the higher caution level discouraged tourism and investment.

Nayib Bukele's excursion to New York fell flat in El Salvador itself.   Donald Trump is deeply unpopular in all segments of Salvadoran society.   While some Salvadorans argue that Bukele is doing whatever is necessary to prevent the cancellation of TPS, even though that might include flattering Trump, others feel that Bukele has run too fast into the arms of the US Department of Homeland Security without getting anything in return.  The abuses of US Customs and Border Patrol and ICE, which have impacted hundreds or thousands of Salvadoran migrants living in the US, have received no condemnation from Bukele.

Professional Services said…
Welcome to our channel.This channel funny and entertainment . pray for this chanel please..press the subscribe and like comments and press the bell ...thanks.https://youtu.be/OxdHufZiCYo
9:30 AM

If the Volcan de Izalco was as cool as Trump, the Hotel del Cerro Verde would have made a fortune!