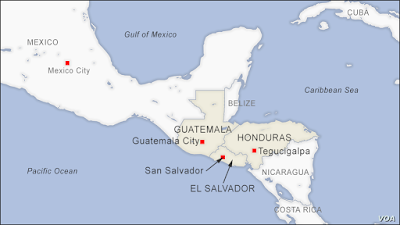 Although Donald Trump faces political challenges in building a physical wall across the southern US border, he is having more success in extending a southern frontier first to the southern border of Mexico and now into Central America.  BuzzFeed describes how this is happening:


In recent months, the Trump administration has begun arm-twisting governments in Latin America into doing its own border work, much like the EU has done with Libya to deal with its immigrant crisis in the Mediterranean. Using a carrot-and-stick approach, the US has threatened the Mexican and Guatemalan governments with sanctions, while also offering Guatemala the promise of work visas for its citizens — and has at least partially succeeded in having them deter immigration through their territories....

These may be the tip of a growing iceberg, with deterrence policies likely to expand ever southward. Last week, acting US Secretary of the Department of Homeland Security Kevin McAleenan traveled to Panama to discuss with officials means of stopping irregular immigration. Shortly after, El Salvador announced that it would implement “border patrols” to combat illegal immigration. On Wednesday, McAleenan visited El Salvador, where he signed a letter of intent with President Nayib Bukele “intended to strengthen the region’s borders.”

El Salvador is deploying 800 police and soldiers to patrol blind spots along its borders where migrant smugglers and transnational criminals operate.  Justice and Public Safety Minister Rogelio Rivas said Thursday that the contingent will be joined by about 300 immigration agents. It will target criminal structures that traffic people, in addition to violent groups who force Salvadorans to flee the country.

“We are determined to improve public safety, and that’s why we’ve come here to launch our new system of border patrols,” Rivas said. “This will be a strategic arm that we will wield to combat transnational crime.” ...

The deployment began in La Hachadura along the country’s border with Guatemala, 78 miles west (126 kilometers) of the capital, and is part of an agreement between the Salvadoran government and acting U.S. Homeland Security Secretary Kevin McAleenan to slow the flow of migrants trying to reach the United States.

Rivas said that since he took his position June 1, authorities have captured 159 migrant smugglers. That’s the sort of action Washington has been pressing Central American governments for.

An important point which Trump probably does not understand is that Guatemala, Honduras, El Salvador and Nicaragua make up the CA-4 zone where their citizens are supposed to have the right to travel freely through the zone without passports and with only national identification (a "DUI" in El Salvador).   The one exception is children, who must travel with passports and with authorization documents from both parents, a regulation intended to prevent child kidnapping and trafficking.   Thus a Salvadoran should be able to cross out of El Salvador into Guatemala regardless of the existence of new border police patrols.

Migration across the southern US border has dropped dramatically in the past three months as Trump's harsh asylum policies, and his coercion of Mexico with tariff threats, start to have their intended effect.  Lost in the statistics are the migrants themselves, and the basic conditions of violence or poverty which push them to flee.
Migration