The deportation pipeline back to El Salvador

September 18, 2019
[Data nerd warning.   This post will be full of numbers and statistics regarding Salvadorans deported from Mexico and the US]. 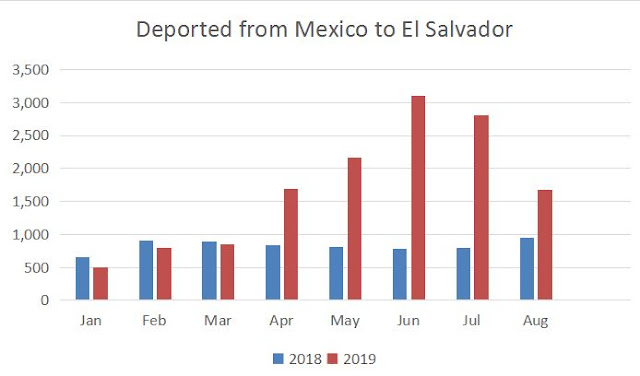 But it is also interesting to compare monthly average deportation rates from Mexico to El Salvador in earlier years, because the high rates from this summer are in the same range as seen in 2015-16:

Deportations from the United States to El Salvador, however, have occurred in a more consistent range. Deportations in 2019 have generally been 10-20% higher than the same period in 2018. 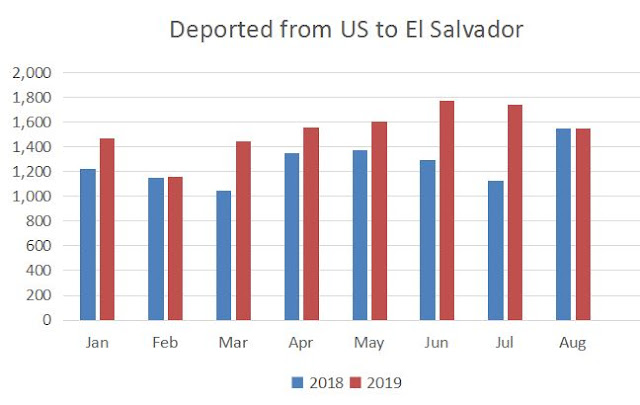 Monthly average of Salvadoras deported from US: The numbers of Salvadorans apprehended and subject to being removed from the US feeds into the next statistic:

There are currently 166,461 pending deportation cases involving Salvadorans in US immigration courts. That is roughly 1/6 of the total immigration court open docket. Remember that the population inside El Salvador is only 6.5 million. Source: Syracuse TRAC immigration database

One takeaway from all this data -- El Salvador is receiving thousands of deported persons every month, and there is a substantial pipeline of many thousands more who will probably be deported under the current US administration.   This means that El Salvador's economy not only needs to grow to provide jobs for all those who are currently unemployed or underemployed, but also to provide for all the deportees of working age arriving back in the country.   In addition, deportees may be in need of protection from the forces that may have caused them to flee, housing, trauma-counselling and more.

It is a substantial burden for a country that has many other challenges to face.