Salvadorans to be guest workers on US farms 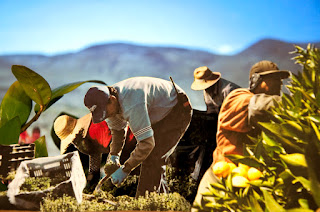 Officials in El Salvador hope to make visas for farmworkers available for temporary stints in the United States in the near future.  El Salvador's Minister of Labor Rolando Castro says he will travel soon to the US to discuss details of the program.

There was immediate interest when the program was first announced, the AP reported:


Hundreds of Salvadorans who had waited in line for U.S. work visas have started heading back to their hometowns after learning the program wasn’t ready yet.

The lines started forming in front of the Labor Ministry last week after the government announced it was negotiating a temporary farm work visa program with the United States.

But by Monday, officials at El Salvador’s Labor Ministry acknowledged they could only take people’s names for a later date when the program is finally implemented.

RevistaFactum shared profiles of some of those hoping to obtain one of the visas. As many as a thousand workers could be heading to work in the farm fields of the US by January according to a recent report in La Prensa Grafica.

The visas being made available are known as H-2A visas.   The US Customs and Immigration Service provides this description of the H-2A program:


The H-2A program allows U.S. employers or U.S. agents who meet specific regulatory requirements to bring foreign nationals to the United States to fill temporary agricultural jobs. A U.S. employer, a U.S. agent as described in the regulations, or an association of U.S. agricultural producers named as a joint employer must file Form I-129, Petition for Nonimmigrant Worker, on a prospective worker’s behalf.

In simplified form, US farms may hire guest workers from foreign countries including El Salvador to work during a season and then return home.   The farm must provide for travel expenses and for housing of the farmworkers.

The vast majority of H-2A visa workers are Mexican.  According to US government statistics, only 145 Salvadorans were hired through the H-2A visa program during the 12 months ended September 30, 2018, compared to more than 180,000 Mexicans.

The requirements for Salvadorans to apply will include a clean criminal record with no ties to gangs, no prior removal from the US, and roots in El Salvador to assure that they will return home and not remain in the US.   Applications for the program will be submitted through a form on the website of El Salvador's labor ministry.

A Salvadoran agricultural worker who is lucky enough to be hired in the program will be working for wages ranging from $10-$15 per hour, which is far higher than the $200-$224 per month minimum wage in El Salvador's agricultural sector.

Expansion of the H-2A program to involve Central American workers is favored by conservative groups in the US like the Cato Institute:

The Department of Labor recently signed an agreement with Guatemala to increase bilateral cooperation for the H-2A visa program for low-skilled Guatemalans. By providing transparency and accountability measures, such as ensuring that labor recruiters are bona fide and vetted, the agreement paves the way for more Guatemalans to come legally.

The administration should sign similar agreements with the other Northern Triangle countries, El Salvador and Honduras, which are responsible for the overwhelming number of migrants, as well as exempt them from H-2A seasonality requirements. Historical experience suggests increasing legal immigration options would reduce the number who come illegally.

The H-2A visa is for seasonal workers in agriculture. It offers low-skilled migrants the best — and in many cases only — opportunity to come work in the U.S., while also addressing the acute labor shortage faced by American farmers. The Trump administration seems to recognize that economic migration can be channeled into this legal system.

Civil Eats is a non-profit news organization covering the food industry.  In an article titled The H-2A Guest Worker Program Has Ballooned in Size, but Both Farmers and Workers Want it Fixed,  Civil Eats  provides a detailed look at the program and including the experience of one H-2A worker from El Salvador.  Here are some excerpts:


The guest worker program is chiefly favored by growers of labor-intensive specialty crops, or fruits, nuts, and vegetables, because they require large numbers of seasonal workers. More than half of the guest workers end up in just five states—Georgia, Florida, Washington, North Carolina, and California—where specialty crops abound. Berry growers are the top employers using H-2A, followed by apple and melon farms.....

[W]orkers have filed multiple lawsuits in recent years alleging some H-2A employers exploit them, steal their wages, provide substandard housing, or blackmail them into submission. Worker advocates say the program’s current structure creates a fundamental power imbalance and makes it ripe for abuse because guest workers are bound to a single grower and their livelihoods—their visas, housing, food, and wages—are completely dependent on that employer.....

“Our view is that the H-2A program is inherently unfair to workers. It denies them economic freedom and democratic rights,” said Bruce Goldstein, president of Farmworker Justice, a national nonprofit that advocates for agricultural workers at the judicial and policy levels. Those workers are vulnerable to abuse because they can earn so much more money through H-2A than they can back home. And since they are not at-will employees, they cannot “vote with their feet,” said Goldstein. If they are fired, they must leave the country immediately.

“If they want to come back for another season, they have to keep the employer happy,” Goldstein said.

Recent changes to the H-2A program have been proposed by Trump administration, as described by Farmworker Justice.  These changes are intended to lower costs for farmers, including wages they are required to pay, and the changes could also lessen regulatory oversight of farms.  The United Farm Workers oppose the changes.   For Salvadoran participation in the program, those changes might make it easier for farms to hire even more guest workers, but at the expense of pay levels and working conditions.

Donald Schaeffer said…
This would seem to be a no-brainer, everyone wins. What is holding this up?
7:26 AM