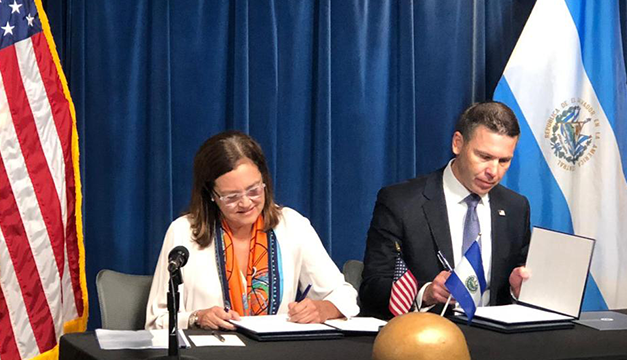 El Salvador's Foreign Minister, Alexandra Hill, was in Washington, D.C. yesterday to sign an agreement with the US Department of Homeland Security.  In the agreement Hill signed, El Salvador pledges to work with the US to become a country where refugees from third countries can seek asylum.  Reuters reported on the joint press conference announcing the agreement:


“The core of this is recognizing El Salvador’s development of their own asylum system and committing to help them build that capacity,” Acting Department of Homeland Security Secretary Kevin McAleenan told reporters in Washington after signing documents with El Salvador’s minister of foreign affairs, Alexandra Hill.

“Individuals crossing through El Salvador should be able to seek protections” in the Central American country even if they were intending to apply for asylum in the United States, he added.

Neither official said when the arrangement would take effect or provide details on how it would be administered. It was unclear how such a deal would work, given that most migrants from other countries take routes that avoid crossing the small, poverty-stricken El Salvador.

“We are going to work out operational details. This is just a broad agreement,” Hill told Reuters upon leaving the signing ceremony.

There should be no doubt that this agreement is not part of some humanitarian interest by the US in creating a region-wide system of humanitarian protection for refugees.  Instead, this agreement is a piece in a Trump administration agenda to make asylum claims impossible in the US with a legal argument that refugees who pass through Mexico, Guatemala, El Salvador or Honduras can and should have applied for asylum in those countries and thus are not entitled to asylum in the US.

You can watch the complete joint press conference here.


Hill started her remarks by stating "My president, president Bukele, since day 1, has changed policy 180 degrees.   We are now allies of the United States after a decade of a government that was pro-Chavez."  Then, Hill talked about two subjects which are not advanced by this agreement at all.  First, she described as "the main issue" the plight of Salvadorans who have fled as migrants because of violence or economic necessity.   And yet the agreement she signed appears to have done nothing for such migrants.

This agreement does not contain measures for Salvadorans who might currently be on the migrant journey, stuck at the Mexican border by metering policies, imprisoned in immigration detention centers, or dumped back in Mexico under the Migrant Protection Protocols to wait out their immigration court proceedings.   While Hill invoked the images of Óscar Alberto Martínez Ramírez, 26, and his toddler daughter Valeria who drowned in the Rio Grande as she spoke about the predicament of Salvadora migrants, this agreement does nothing to change the Trump administration policies which force migrants to attempt dangerous journeys across the Rio Grande or through barren deserts.

Hill also talked passionately about the 195,000 Salvadorans in the US on Temporary Protected Status ("TPS") which the Trump administration is attempting to cancel and force them to return home.  Hill stated that these TPS holders have deep roots in the US and put their hands over their hearts for the US national anthem and also for the national anthem of El Salvador.  She made it clear that the Salvadoran government was advocating for a path which would allow TPS holders to remain in the US.

However, Jonathan Blitzer of the New Yorker magazine  tweeted that Hill was having no success on this point:


According to a senior Trump Administration official, gov’t of El Salvadoran asked U.S. to extend T.P.S. for 200K+ Salvadorans living in the U.S. in exchange for signing asylum deal announced today. And was told that T.P.S. was a non-starter for US. Salvadorans signed anyway.

El Salvador would almost be starting from scratch in creating a system to accept refugees.   Although El Salvador passed a refugee law in 2002, I searched in vain across current Salvadoran government websites to find any information about current activities of  "CODER," the commission which is established under the law to accept refugee applications.   The only mention was a press event in 2016 where then foreign minister Hugo Martinez stated that 49 persons "in recent years" had been accepted as refugees in El Salvador.

One also has to question whether El Salvador seriously plans to accept any quantity of refugees from other countries like Venezuela or Cuba in the future, given its need to devote resources to the needs of thousands of Salvadorans being deported from the US and Mexico each year.

So what does El Salvador get out of signing this agreement?   There is probably some additional security funding which will make its way to El Salvador to fight gang violence on the grounds that such violence is a push factor for migration.  El Salvador also looks to see progress on agricultural guest worker visas for legal migration.   Finally, the agreement pushes Nayib Bukele's argument that he is the best partner for the US in the region, as he continues to seek investment and backing for his other ambitious initiatives in the country.

But for the Salvadoran migrant outside of the country, despite the words of Foreign Minister Hill, this agreement offers nothing.
Migration US relations

Lawrence M. Ladutke said…
The agreement doesn't do anything for the United States--it does everything for Trump. Not that he sees any difference, but you should.
10:07 AM