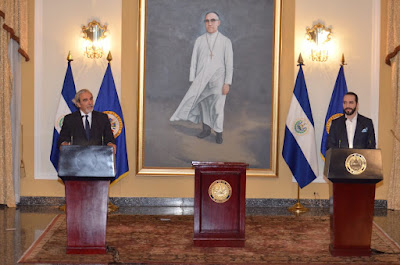 Today El Salvador's president, Nayib Bukele, announced the launch of the International Commission against Impunity in El Salvador ("CICIES" for its initials in Spanish).  Bukele was accompanied by Luis Porto, a representative of the Organization of American States (OAS), in making the announcement.  They told the assembled dignitaries and reporters that El Salvador's Foreign Ministry would be signing a letter with the OAS regarding OAS backing for CICIES.   The OAS role will be in the form of technical assistance for the effort.

A summary of the mandate of CICIES was set out in a press release today from the OAS:

The purpose of CICIES is to support, strengthen and actively collaborate with the institutions of the Republic of El Salvador charged with preventing, investigating and punishing acts of corruption and other related crimes, including crimes related to public finances, illicit enrichment, money laundering, and national and transnational organized crime, in non-limiting terms.

In these first weeks of work, CICIES will establish relations with the entities dependent on the Executive Branch such as the National Civil Police - where a Specialized Anti-Corruption Unit linked to CICIES will be created-, the Ministry of Finance, the General Directorate of Customs, the General Directorate of Migration, and the Superintendence of the Financial System, among others.

At the same time, the OAS mission will hold corresponding meetings with the Legislative Assembly, the Supreme Court of Justice, the Attorney General's Office, and the Court of Accounts and Civil Society organizations, among others, in order to establish cooperation agreements and strengthen the definitive agreement.

It is important to highlight that the values and principles that will guide CICIES are: transparency, accountability, obtaining the truth through legal means and justice as a fundamental value, the preeminence of respect for human rights, change of paradigm in public repudiation in the face of corruption, the promotion of education that generates a strong culture of anti-corruption, public access to the management of state resources, and training in anti-corruption policies, among others.

CICIES, in the exercise of its functions and in the current legal framework, may establish collaboration agreements with other institutions responsible for preventing, investigating and punishing acts of corruption and related crimes.

In this way, CICIES is installed, assuming a strong commitment in the fight against corruption and impunity.

Bukele said that the formation of the CICIES will not require approval of El Salvador's Legislative Assembly, but could be initiated by executive decree.  He asserted that the president can create a commission to have the power to audit and investigate corruption within all of the entities of the state which fall under the executive branch of Salvadoran government.  This includes the power to gather, review and prevent the deletion of documents within those agencies.   Customs, the Treasury Ministry and the Financial Systems Superintendent will all be involved because of the scope of information about transactions which they possess.

Although Bukele stated that the CICIES was starting as of today (thus fulfilling his promise to launch the effort in his first 100 days in office), Porto from the OAS stated that CICIES doesn't yet have staff, offices or equipment.

Combating corruption was a major part of Bukele's campaign for president.  He used slogans including "there's enough money when no one steals" and "return what was stolen."   CICIES, as unveiled today, offers a laudable start, at least on paper, at his pledge to tackle the corruption which has been endemic in Salvadoran government for decades.

There are at least three major questions left unanswered by today's press conference:

1)   Who is leading CICIES?   Bukele and Porto state that CICIES will be autonomous, but who will be appointed to set its direction?

2)    How will cases be selected?  When the mandate is to investigate possible corruption in any agency of the state, how will CICIES decide where to start?

3)    Who controls the funding for CICIES?

Hopefully some of these questions will be answered in the future, because they are key to understanding how effective CICIES can be.

These questions might have been asked by certain reporters who were blocked from attending the press conference.  Reporters for the online publications Revista Factum and El Faro tweeted before the press conference that they were being blocked from attending.  Those two publications have uncovered important cases of corruption in El Salvador in the past.   To block them from today's event is not an auspicious beginning to an anti-corruption effort.
Corruption Nayib Bukele