August 12, 2019
Many US officials have been talking about and visiting El Salvador in the first 12 days of August.   At the beginning of August came a statement from acting Department of Homeland Security Secretary Kevin McAleenan that the US is seeking to negotiate a Safe Third Party agreement with El Salvador and Honduras similar to the agreement that the US says it has negotiated with Guatemala.   Such agreements are proposed to prevent migrants who pass through such countries from being able to successfully seek asylum in the US.  There has not been an official statement from the Salvadoran government about the concept.

On August 9, a Congressional delegation of Democrats arrived in El Salvador led by Speaker of the House, Nancy Pelosi.   Speaker Pelosi expressed skepticism about Trump's plan to enter safe third party agreements with the Central American countries.  Her joint press conference with president Nayib Bukele can be viewed here.

[I have no idea what Nancy Pelosi meant in her remarks when she said that she went to El Mozote and met with orphans in the 1970s.   Even assuming that she got her decades messed-up and meant the 1980's after the 1981 massacre of children and others at El Mozote, it seems highly unlikely that she traveled to the guerrilla controlled area of Morazan during the war years].

Along with Pelosi in the delegation was long-time friend of El Salvador, Representative James McGovern of Massachusetts.   According to Reuters:

Speaking at the University of Central America, site of a 1989 murder of Jesuit priests during the war, McGovern said:

“We took sides in that war, we provided a lot of military assistance, including to those who murdered these Jesuits without conditioning them on human rights.

“When the war ended, our aid dropped dramatically. We should have stayed and helped this country rebuild. We did not,” he added. “We deported gang members back to El Salvador ... we have a moral obligation to this country.”

The full press conference with McGovern and the Congressional delegation can be viewed here.


On the same day, however, a different tone was being set by the head of US Immigration and Customs Enforement (ICE) as he also visited El Salvador.

From an ICE News Release:


Acting Director of U.S. Immigration and Customs Enforcement (ICE) Matthew Albence visited El Salvador from August 9-10, 2019. The purpose of the acting director’s visit was to discuss ICE enforcement priorities and the agency’s commitment to dismantle networks involved in human smuggling.

Albence’s agenda included meetings with U.S. Embassy officials to talk about immigration and security topics. He also visited the Care Center for Migrants to observe actions the Salvadoran government is taking regarding repatriations and reintegration of returnees to a productive life. During his visit, he met with Foreign Affairs Minister Alexandra Hill to discuss topics of common interest and specific actions to stop illegal immigration.

The acting director took advantage of his visit to El Salvador to warn about the dangers of illegal immigration to the United States, especially because of the human smuggling networks that operate at the border. ICE’s Homeland Security Investigations (HSI) has detected a wave of fraudulent families that have recently attempted to cross the border illegally. Mr. Albence stressed ICE’s commitment dismantling criminal organizations and highlighted the agency’s efforts to protect children and prevent them from becoming smuggling victims.

In a press conference Friday during his visit, Albence tried to send a message to Salvadorans who might consider migrating irregularly: "I will clearly tell the people of El Salvador: Do not attempt to migrate illegally to the United States, if they do they will be arrested and deported. We will protect our borders, we will protect our communities. "

Arriving in El Salvador to manage the twists and turns fo the US relationship is a new ambassador Ronald D. Johnson.    His immediate predecessor, Jean Manes, was a career State department official, but Johnson's background is the military and intelligence services.
Johnson was sworn in on August 6 after his confirmation by the Senate. 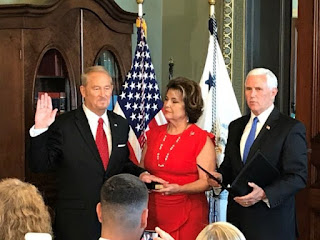 New US Ambassador to El Salvador Ron Johnson is sworn in