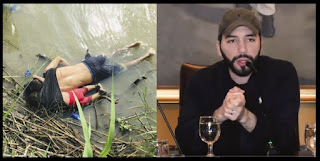 The shocking images of Óscar Alberto Martínez Ramírez, 26, and his toddler daughter Valeria face down after drowning in the Rio Grande shocked consciences around the world.    These two who had fled El Salvador with Valeria's mother lost their lives trying to enter the United States after waiting for weeks in a dangerous border zone hoping to enter at an official border point.

As their bodies were being repatriated to El Salvador, eyes turned to El Salvador's president and what he would say about this tragedy.    At a press conference on Sunday, Bukele was asked questions by the BBC and SkyNews about the tragedy and the phenomenon of migration.

We can blame any other country but what about our blame? What country did they flee? Did they flee the United States? They fled El Salvador, they fled our country. It is our fault.

Bukele stated that history had shown that Trump's attempts to block migrants would not work, but rather than focus on blaming Trump or Mexico or another government, he returned to the theme that conditions in El Salvador for decades had been pushing people out of the country.

As he has stated before in appearances in the United States, Bukele said that migrants were leaving El Salvador because of the country's failure to provide jobs, opportunity and security to its population.    He repeated his assertion that through his plans to create hundreds of thousands of jobs and plans to provide security, forced migration would be reduced to zero, and the Salvadoran president encouraged the US to support El Salvador in creating those jobs.