June 03, 2019
Nayib Bukele has been working quickly to put his own stamp on El Salvador's executive branch

Bukele announced the rest of his cabinet.   His primary cabinet ministers end up being equal parts men and women.   As El Faro describes the new cabinet in an article published after the announcements, the majority of the new cabinet members are people who have been part of Bukele's circle of close business associates, confidants and members of his administration in San Salvador in the past.

With respect to Bukele's security cabinet, a commander from El Salvador's Navy, René Merino, will be the new Minister of Defense.   The new Minister of Justice and Security, Rogelio Rivas Polanco, is a civil engineer by training who does not have  direct police or criminal justice background.   He was one of the founders of the party Nuevas Ideas and most recently he held the position of head of the Institute of Municipal Development in El Salvador.  The new head of the National Civilian Police is a career police officer.

Bukele announced plans to streamline the government.   He is eliminating the Secretariats of Social Inclusion, Governance,  Vulnerability, Transparency and Technology within the executive branch, saying their functions will be absorbed within other areas of his administration.   New secretariats of "commerce and investment" and "innovation" will be formed.

Perhaps the most important symbolic action by Bukele was an order he gave to El Salvador's armed forces to remove the name of Domingo Monterrosa from the third infantry barracks outside of the city of San Miguel.  Monterrosa was the military commander who led the troops in the 1981 massacre of children and others at El Mozote, and has, nevertheless, long been considered a hero by the military and persons from the right in El Salvador.   On Sunday, photos circulated of soldiers painting over Monterrosa's name on the exterior of the barracks. 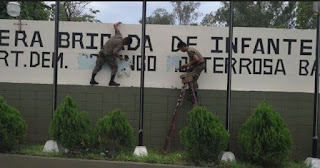 Another action related to the crimes of the civil war is Bukele's decision on Monday to fire Jorge Antonio Meléndez, Director General of the Civil Protection Agency, for having been one of the killers of revolutionary poet, Roque Dalton.  In the past Melendez has denied his involvement.

Finally, when a tweet from El Diario de Hoy showed a picture of a young man who had raised money to complete architecture school by building and selling scale model buses, Bukele tweeted that his commissioner of Strategic Projects, Luis Rodriguez, should interview the young man: 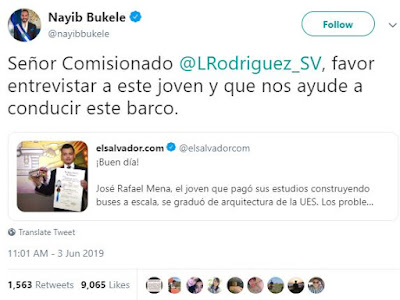 A short time later, Rodriguez replied on Twitter that the youth would be hired to work on initiatives for modernizing school infrastructure.