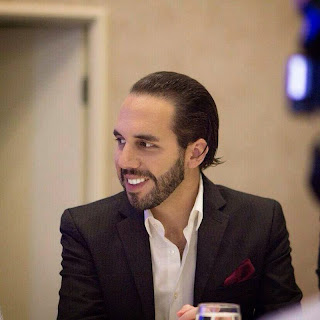 Poll results  from the Institute of Public Opinion at the University of Central America show that Nayib Bukele will come into office on June 1 with solid support from the Salvadoran public.

In polling conducted at the end of March, 61.4% of those polled indicated that they have trust in Bukele.   An even greater percentage, 67.9%, believe that the country is going to improve under Bukele's administration.

The optimism the public shows for Bukele's administration is similar to the optimism shown for Mauricio Funes when he became the first president elected from the FMLN in 2009.

For the past week, Bukele has been announcing a new cabinet minister every other day.   So far he has only named women to his cabinet, giving them the posts of Foreign Minister, Minister of Culture, Minister of Local Development and Minister of Housing.   It's both a good demonstration of commitment to gender equity, and a show of how Bukele continues to be a master of the symbolic gesture.