Nayib Bukele and the press

May 04, 2019
Yesterday was the International Day of Press Freedom.   In El Salvador, a series of social media statements by incoming president, Nayib Bukele,  is raising questions about how much he actually values an independent free press.

Bukele has had a tense relationship with the Salvadoran press.  His time as mayor of San Salvador and his presidential campaign were marked by a running feud with the country's largest newspaper La Prensa Grafica (LPG).  For example, LPG pursued legal claims against Bukele's team for being behind a cloned version of the LPG website, and openly supported Bukele's opponent Carlos Calleja in the presidential election while ignoring Bukele in all of its pre-election coverage.  In point of fact, LPG's coverage of Bukele was, and is, highly slanted and partisan.

Perhaps as a consequence, Bukele rarely gave any interviews to the Salvadoran press during his campaign, preferring to make one directional statements through social media and to appear at occasional staged campaign events before large crowds of his followers.

After the election, Bukele has continued his practice of not giving interviews, beyond a single interview he gave to the Associated Press.  Bukele also explained that he was not announcing his cabinet picks until close to the June 1 start of his presidency because they would be subjected to scrutiny, investigation and attacks by the press.

LPG is hardly the entire universe of Salvadoran journalism, and Bukele has now turned towards discrediting the journalistic enterprise in general.  In a series of tweets in the past two weeks, Bukele has been working to undercut any critics in the press by arguing that impartial journalism does not exist:

That those of the media who presented themselves as "independent" are going out now with a clear and totally subjective agenda shouldn't startle anyone.   It's clear that the media can't live on air, it has its sponsors and they must submit themselves to their agendas. 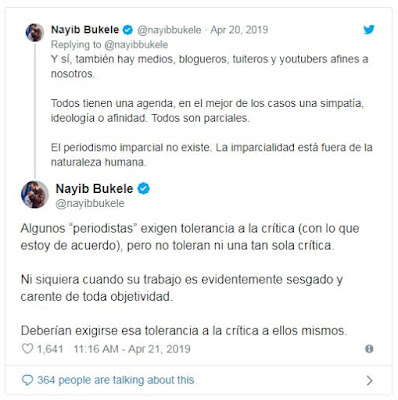 And yes, there also are media, bloggers, tweeters and YouTubers aligned with us.  Everyone has an agenda.  In the best of cases from sympathy, ideology or alignment.  All are partial.  Impartial journalism does not exist.  Impartiality is outside of human nature.

Some "journalists" demand toleration of criticism (I am in agreement with that) but don't tolerate not a single criticism. Not even when their work is obviously slanted and lacking in any objectivity.


Shortly after those tweets, on April 24, Bukele made an address on Facebook Live (his first and only public address in El Salvador since election night). He spent a significant part of the address continuing this theme that all the press had agendas, had financial interests, had family interests and could not be impartial.

In his Facebook Live address Bukele singled out two news outlets, LPG and the online periodical Revista Factum.  He followed up this week with more Twitter attacks on Factum for "journalistic assassination": 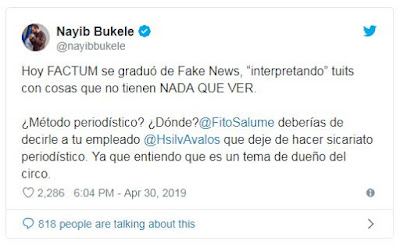 Today FACTUM graduates from Fake News, "interpreting" tweets with things than have nothing to see.   Journalistic method?  Where?  Fito Salume you should tell your employee Hector Silva Avalos to cease doing journalistic assassination.  Since I understand that it's a theme of the circus owner.


One of the journalist co-founders of Factum is Héctor Silva Ávalos.  He is the son of the late Héctor Silva, a prominent respected politician of the left who was mayor of San Salvador from 1997 to  2003.  Fito Salume is Secretary General of Democracia Salvadoreña, a tiny centrist party which participated in coalition with ARENA supporting the candidacy of Carlos Calleja against Bukele in the presidential election.   He is not an owner of Factum or employer of Silva Avalos.

Factum was founded in 2014 has done important investigative journalism.   It is a nonprofit independent effort where over the years the majority of its funding has come from international organizations, primarily the National Endowment for Democracy and the Open Society Foundation, as well as the voluntary efforts of some of its journalists.   Factum's investigations have described corruption in the administration of Saca and Funes, the corruption of attorney general Luis Martinez, the workings of extermination squads inside elite units of the PNC, and more.

Factum has certainly been covering Bukele extensively, and raising questions which so far Bukele has been unwillingly to answer.   These questions include asking how Bukele plans to finance all his campaign promises, how Bukele is using advisors who formerly worked for imprisoned ex-president Tony Saca, and when Bukele will share information about his transition team and cabinet.   Bukele has chosen to respond so far with Twitter attacks rather than responding directly.

Factum has responded to Bukele with a statement setting the record straight about its ownership, its funding, and its journalistic mission.   It is probably worth noting, as Factum did, that Bukele has not been similarly transparent with respect to the source of the funding for Nuevas Ideas.

El Faro's take on all of this: 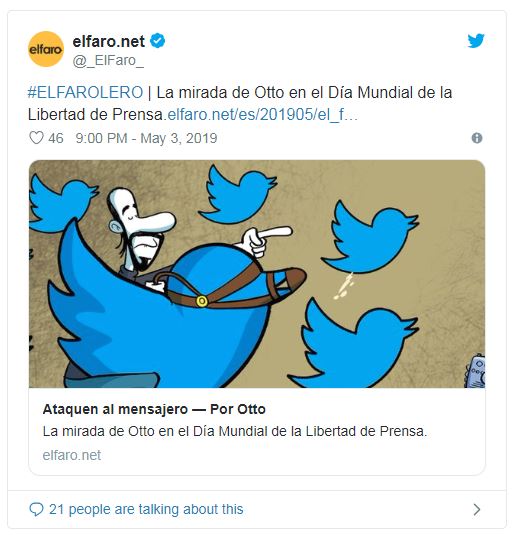 
*Note Héctor Silva Ávalos is also a contributor to the website InsightCrime, and from time to time I have republished on El Salvador Perspectives articles written there by him.