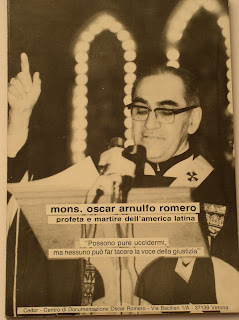 March 24 is the 39th anniversary of the assassination of Oscar Romero by a death squad in El Salvador.   It was one of the opening events of a bloody civil war which would have tens of thousands of civilian victims.

Despite the notoriety of the murder of a man who would subsequently be declared a martyred saint of the Roman Catholic church, no prosecution of his killers has ever reached conclusion in the Salvadoran courts.

After an amnesty law was passed in 1993, no prosecution moved forward for 23 years until that law was declared void by the Constitutional Chamber in El Salvador.   Shortly thereafter the case against Romero's killers was reopened, but there has been little visible progress.  The Due Process of Law Foundation has a good summary this week of where such legal proceedings stand today:


The Attorney General’s office (under Douglas Meléndez, whose term ended in early January 2019) publicly supported the reopening of the Romero case. Nonetheless, Judge Chicas had to issue a reminder to the Attorney General’s office to comply with the Constitutional Court order invalidating the Amnesty Law, raising questions about the true commitment to this and other wartime cases. Furthermore, there are serious doubts about whether new Attorney General Raúl Melara, who has close ties to ARENA, will continue this incipient progress. For now, prosecutorial action on this case has been limited to pro forma requests for information from the judge, generally about facts already known regarding Saravia. It does not appear that the Attorney General’s office is carrying out in good faith Judge Chicas’ recommendation to pursue specific new lines of investigation, including those related to prosecution of intellectual authors.

Saravia refers to Captain Álvaro Saravia, who described in an interview with Carlos Dada of El Faro  his role in the death squad which committed the murder.   Saravia is a defendant in the currently open case.  But beyond Saravia, prosecutors have shown little interest in illuminating the truth about the rest of the plot to kill Romero, including other participants and intellectual authors and the role of Roberto D'Aubuisson, founder of the ARENA political party.

The biggest threat today to the ongoing pursuit of this case is perhaps the proposed draft of a new law which would re-establish amnesty for the war crimes committed during El Salvador's civil conflict.   Human rights groups and victims' organizations have mobilized against the proposal which could preclude justice not just for Romero, but for countless other innocents who died at the hands of the military and death squads.

But the alleged suspects in war crimes committed by the PRTC, ERP, RN, PCS, and FPL will likewise be able to thumb their noses at the victims of their viciousness -

Law makers (law breakers?) and Salvadoran politicians on both sides (e.g. Nida Diaz, alleged to have been instrumental in the authorizing/planning of the Zona Rosa massacre) are terrified that once the El Mozote trial is over, and verdicts rendered, and sentences given, that the next trial may be for the Zona Rosa murders...the murders of the 4 Dutch journalists...the execution of two captured U.S. aviators (POWs)...and on and on and on.

El Salvador, should its government reinstate the "get out of jail free" law against international condemnation for even considering doing so, will join the bad old days of Argentina and all those other Central and southern cone countries that participated in Operation CONDOR...and in the "cleansing" of undesirables that began under Fidel and Raul Castro in Cuba and continues to this day...and across the Gulf of Fonseca in Nicaragua.

A renegade state is just that.

"Yeah, we did it. We killed everyone." - Colonel Domingo Monterrosa, CDR, Atlacatl

“The case has already been investigated, I have never been charged, you are part of a communist plot to take revenge”- Colonel Reyes Mena, 4th BDR CDR, 2018

"Arrest warrants have been issued in El Salvador for three former leftwing guerrilla fighters wanted in connection with the execution of two American soldiers whose helicopter was shot down during the country’s 1979-1992 civil war.
The warrants are the first of their kind since a 1993 amnesty law guaranteeing impunity for civil war crimes was annulled a year ago. They were issued amid growing anger at the government’s reluctance to pursue perpetrators." - El Salvador, 25 July 2017

“So much toilet paper.” – Goering’s reference to pre-war diplomatic treaties.

“You must put no man on trial before anything that is called a court… under forms of judicial proceeding, if you are not willing to see him freed if not proved guilty.”
― Ann Tusa, The Nuremberg Trial

“Death by hanging. That, I thought, I would be spared.” Keitel

“I cannot subscribe to the perverted reasoning that society may advance and strengthen the rule of law by the expenditure of morally innocent lives but that progress in law may never be made at the price of morally guilty lives.”
― Ann Tusa, The Nuremberg Trial

“Death, death. Now I won’t be able to write my beautiful memoirs.” Ribbentrop

“stay the hand of vengeance and voluntarily submit their captive enemies to the judgement of the law is one of the most significant tributes that Power has ever paid to Reason.”
― Ann Tusa, The Nuremberg Trial

"Destruction is not the law of humans. Man lives freely only by his readiness to die, if need be, at the hands of his brother, never by killing him. Every murder or other injury, no matter for what cause, committed or inflicted on another is a crime against humanity."
Mahatma Gandhi