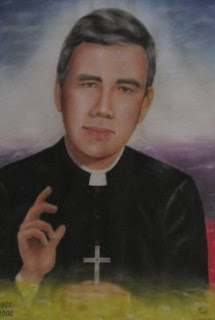 Sunday, March 12, is the 40th anniversary of the martyrdom of Father Rutilio Grande, S.J. Grande was a Jesuit priest working with poor campesinos in the countryside near El Paisnal, El Salvador. On March 12, 1977, while driving on the road between El Paisnal and Aguilares, assassins from Salvadoran security forces killed Father Grande, as well as two of his campesino parishioners, Manuel Solorzano, 72, and Nelson Rutilio Lemus, 16. Rutilio Grande was a friend of Archbishop Oscar Romero. Father Grande would be the first of many priests to be murdered in El Salvador's bloody years of internal conflict.

What Father Grande learned and lived out was a simple truth: Until the marginalized communities he served created their own agency, until they acted upon their own reality as a church community, nothing would change. An outside leader could not come in and transform poor communities. Only local lay church leaders could encourage communities to become agents of their own change. The role of the Catholic Church, he believed, was to help those leaders emerge, support them, form them and walk with them. Inspired by the Gospel, these community leaders would become the most effective agents for the integrated development of their communities.

For two years Father Grande and his team led a delicate “mission” to very poor communities around his hometown. Through their own reading of Scripture, these communities came to realize that it was not God’s will that they remain poor. Building the kingdom of God meant they needed to advocate for their communities in ways that were peaceful—but forceful. Throughout Father Grande’s pastoral “experiment” in the rural villages of El Salvador, Archbishop Romero carefully watched his friend and confidant try to apply the social teaching of the church to the reality of poor, oppressed rural communities.

Slowly people began to change their mindset and realize their oppression was not the will of God but actually contrary to God’s love for them. But as their awareness and demands for change grew, so, too, did the danger they faced. Soon threats came in against both Father Grande and the communities he served, mainly from wealthy landowners who felt threatened by the priest’s work encouraging rural farmers to organize for a better life. Archbishop Romero witnessed the risks taken by Father Grande and saw the road he willingly chose in defense of the people he loved. On March 12, 1977, Father Grande was assassinated by government death squads at the behest of wealthy landowners.

Kelly is the author of the splendid book, "When the Gospel Grows Feet: Rutilio Grande, S.J. and the Church of El Salvador."

The online periodical ContraPunto published in 2015 an interview with Julio Sánchez, a member of El Salvador's National Guard, who admitted to his participation in the 1977 assassination of Father Rutilio Grande, a Jesuit priest. Here is an English translation of a short portion of the interview:

Read the rest (in Spanish) here. Sanchez died in 2015 in a hospital in Los Angeles.

“I am very close to Rutilio”, the Pope reportedly said, revealing that he treasures a scrap of bloodied fabric from Romero’s vestment and a catechesis notebook belonging to Rutilio. He spoke of them as two prophetic figures highlighting how the martyrdom of Rutilio ‘converted’ Romero, and he reflected on how misconceptions and confusion regarding liberation theology almost halted the canonization process for the Salvadoran saint. “The important thing”, he said, is not to be overwhelmed by ideology but to follow Rutilio’s example “who never wavered but did what he had to do”.

Rutilo Grande's process towards possible beatification and eventual canonization as the second saint from El Salvador was commenced in 2016.   Pope Francis has stated that the process is going "very well" and the archbishop of San Salvador told the press the process has "advanced greatly"

Today's anniversary was commemorated with a procession from the site of Rutilio Grande's murder along the road to the church in El Paisnal where he served his beloved community.

There is a photogallery here with various images from Rutilio's life.