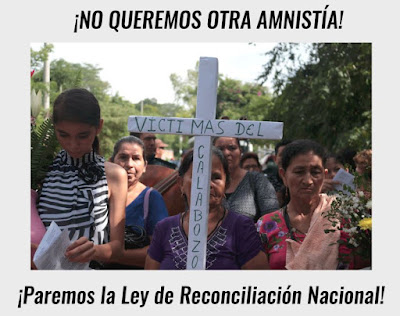 The headline in El Faro tells the story:

Assembly seeks new amnesty for war criminals from the army and the guerrilla forces.

Human rights groups are decrying a proposal before an Ad Hoc Commission of El Salvador's legislature which would have the practical effect of restoring the amnesty which was ruled unconstitutional in 2016 by the Constitutional Chamber of El Salvador's Supreme Judicial Court.   After that ruling, prosecutions for some of the crimes against humanity committed before and during El Salvador's 12 year civil war have slowly commenced, including the case of the massacre of hundreds of children and others at El Mozote.

Much has changed politically and judicially in El Salvador, however, since the 2016 ruling. Conservative parties have a stronger majority in the National Assembly after their victories in the 2018 legislative elections.   Those conservative parties had the power to choose four new magistrates to replace the four outgoing magistrates of the Constitutional Chamber who had invalidated the 1993 amnesty law.  Those conservative parties chose a new attorney general, Raúl Melara, whose father was attorney general at the time of the passage of the original amnesty law in 1993.   And the National Assembly appointed an "Ad Hoc Commission" to propose a law on national reconciliation.

Last week, one of the members of the Ad Hoc Commission, Rodolfo Parker, shared a draft version of a new law meant to address the impact of court ruling invalidating the 1993 amnesty.   As El Faro describes, the proposed law would preclude anyone from going to prison for massacres and other crimes against humanity:


"Broad, absolute and unconditional amnesty is granted in favor of all persons, independent of the side to which they belonged." So begins the first article of the document that deputy Parker proposed to the deputies of the Ad Hoc Commission. The proposed amnesty excludes war crimes or crimes against humanity, or those included in the report of the [UN] Truth Commission, but also provides that all these judicial investigations will have the "sole purpose" of clarifying the truth and those responsible, nonetheless, they will not be able to be punished with prison nor prosecuted for their civil responsibility.

In El Faro's reporting, there did not seem to be a single politician who was speaking out against the passage of a new amnesty law.    El Faro asked Parker if his proposal would block the generals being prosecuted for the El Mozote massacre from going to prison.   His response: "Sin duda."    "Without a doubt."

Human rights and other groups have denounced this commission made up of members who have been alleged to have involvement in various human rights violations:
Pretty clearly this group of commission members has a conflict of interest in determining whether El Salvador should be seeking justice for crimes against humanity from the civil war.
Leading human rights organization Cristosal wrote:


Recently, on February 19th of this year, the Commission made known the existence of a draft Reconciliation Law created by deputy Rodolfo Parker (the Truth Commission’s report found Deputy Parker responsible for presumably altering information in order to cover up the participation of high ranking military chiefs in the assassination of six jesuit priests and two employees of the Central American University (Universidad Centroamericana). ...

The organizations that form part of the Group Against Impunity in El Salvador believe that the composition and functioning of the Ad Hoc Commission are not legitimate, that it contradicts international human rights standards for these types of processes, and excludes the affected victims. Thus, we assume that it is very probable that the Ad Hoc Commission seeks to propose a project that constitutes a new impunity law, failing to comply with the ruling that declared the Amnesty Law unconstitutional.

Fr. José María Tojeira who currently heads the Institute for Human Rights at the UCA tweeted:

Some think that it is good to have laws for reconciliation made by those who have been identified for violating human rights.  Following this logic, it would be good to have corrupt politicians draft laws against corruption.  Parker and company should broaden their amnesty to the crooks.

Human rights groups have also denounced the failure of the Ad Hoc Commission to hear from victims.   No representatives of victims have been allowed to make presentations to the commission.  Instead, only the victimizers are drafting the law for their own amnesty.

There is little reason to think that either existing president Salvador Sánchez Cerén or president-elect Nayib Bukele would block this legislation.   Sánchez Cerén has been identified as a potential defendant for command responsibility related to certain atrocities committed by guerrilla fighters and hence could benefit from a new amnesty, along with some of his fellow commanders from the guerrilla insurgency.   The section of Nayib Bukele's plan of government dealing with human rights is noticeably lacking in serious discussion of how impunity for those who committed war crimes and crimes against humanity should be addressed.   Both the current and incoming president lack the votes in the National Assembly to sustain any veto of a new amnesty law.

Update: Nayib Bukele has come out against the proposed amnesty law as a corrupt bargain between FMLN and ARENA.

El Salvador can then rightly take its place as more corrupt, foul, and without moral character than Germany was in terms of post war national accountability and taking global responsibility for its crimes against humanity.

Should the government indeed derail the progress made to hold those accountable on both sides for their crimes, the United States should seriously decrease all forms of investment, financial aid, and other forms of "advise and assistance" to include law enforcement.

The latter as if El Salvador won't enforce the laws against mass murder, then it needs no funding/equipment/training to enforce any laws.

And let's not forget alleged war criminal Colonel Reyes Mena, under whose orders four Dutch journalists were targeted, tracked, and murdered as revealed in the 2018 documentary "In Cold Blood" - a man living in the United States who offers no remorse whatsoever for his crime.