January 19, 2019
El Salvador is a country with a population professing to hold religious faith, 80% of them Christian. In that context, political candidates face questions about their own faith, and their campaigns seek the support of religious groups.    That has certainly been the case in this presidential election.

Nayib Bukele has probably been required to speak the most about religion, because his father was Imam to the country's small Islamic community.   Although his family's roots are in Palestine, his father actually converted to Islam in El Salvador.  Nayib's mother is Roman Catholic.  Bukele asserts that he is a believer in Jesus Christ, but does not belong to any specific religious denomination.

Bukele has been the subject of a smear campaign seeking to label him as an adherent to Islam and anti-Christian.  Readers in the US will recognize similarities to the campaigns to label Barack Obama a Muslim.  Someone calling themselves "Christians United for El Salvador" spread leaflets across parts of the country labeling Bukele a Muslim and asserting that when Muslims take power they close Christian churches.

More recently, a Mexican newspaper published photos showing Nayib Bukele appearing to pray in a mosque with a brother, although it is not clear when and where the pictures were taken.   Bukele's opponents are now using the photos to question whether his profession of a Christian faith is sincere.

I have not seen any indication that these efforts by certain opponents are having any effect on Bukele's popularity.  Perhaps the best response comes in an extended interview he gave in in 2015 while running for mayor of San Salvador where Bukele spoke about his religious faith and his family's religious roots.

There have been plenty of other images of Bukele in religious settings, such as speaking with Pope Francis in Rome: 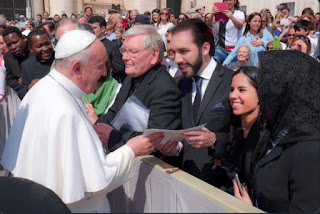 Bukele also tweeted a video of his visit to the Church of the Nativity in Bethlehem in February of this year, close to the birthplace of his paternal grandmother.    He also appeared at a recent evangelical rally with Argentine preacher Dante Gebel.

Other presidential candidates have also had entanglements with religion.  Shortly after the canonization of Oscar Romero last October, an FMLN campaign billboard appeared with an image of Romero and the words "Today more than ever the example of Monseñor Romero guides our path."    Hugo Martinez quickly asked that the advertisements be removed, stating that as a faithful Roman Catholic, he felt the images of El Salvador's new saint should not be used for political purposes. 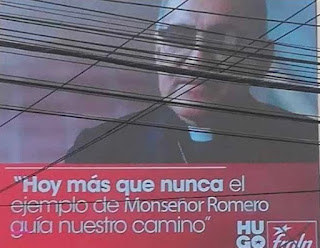 Carlos Calleja, also a Roman Catholic, has a different sort of Romero problem -- his political party ARENA was founded by Roberto D'Aubuisson, the man widely believed to have given the orders to assassinate El Salvador's saint Oscar Romero.   Calleja has been awkward in facing this issue, especially after he appeared at a commemoration of D'Aubuisson's birth at the tomb of the death squads leader.

Meanwhile the candidate for president from the VAMOS party, Josué Alvarado, faces a legal challenge in El Salvador's Supreme Court, asserting that he is disqualified from running for president because of a constitutional provision which prohibits a religious leader from becoming president.  Alvarado had been president of Christian Intercontinental Fraternity, a post he says he resigned from in June 2018.


The influence of religion is also seen in the stances which the candidates take on the abortion issue.   El Salvador has one of the strictest abortion prohibitions in the world, making the procedure illegal in all circumstances without exception.  An article in RevistaFactum highlights the candidates' positions on abortion.  Bukele would only permit an exception to allow abortions to save the life of the mother.  The other candidates do not express support for any particular exception, saying at most that this needs to be the subject of discussion within Salvadoran society.

None of the candidates support same sex marriage in the country.

Mario Vega, Pastor of Elim Church, one of the largest evangelical churches in Central America  described in an interview on El Faro Radio how presidential candidates flirt with the evangelical churches in the country in attempts to get the endorsement of this influential sector of society. Vega was skeptical about the sincerity of these politicians.  He shared this example:

"In an earlier presidential campaign, another famous evangelical singer came, a Panamanian.   A candidate had invited him, and they held an event in a stadium filled with evangelicals.   He (the singer) said that God had chosen this person to stop communism in the country and that he was the one that was going to be the new president.   This person who was to be the new president is now in sector 9 of Mariona [prison]" said Vega [referring to former president Antonio Saca].