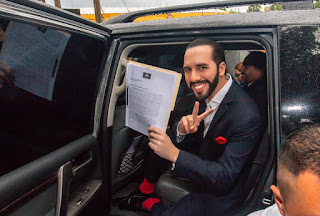 An article last week on the website of America's Quarterly asked Will El Salvador’s Nayib Bukele Be the Next Social Media President?.   If you are wondering what a "social media president" would mean for El Salvador, join the crowd.   As the AQ article points out, Nayib Bukele is all about branding:


“Bukele is a social media strategist,” said Ivón Rivera, a communications professor at the Universidad Centroamericana whose research focuses on social media and fake news. “He has positioned himself as a brand, his political speech is outright marketing, and he presents himself as someone ‘cool’, to appeal to young people.”

Journalists have expressed worry about this approach, since Bukele avoids press conferences and interviews. The candidate instead goes straight to his followers via Facebook live, eliminating opportunities to be questioned.

Despite his history with the FMLN, analysts insist on describing Bukele as an “outsider” because he doesn’t fit into the traditional Salvadoran mold.

“He’s selling himself by distancing himself from the establishment,” said Avelar. “He’s very similar to other politicians, like Andrés Manuel López Obrador in Mexico and Jair Bolsonaro in Brazil. He’s following the anti-political trend.”

The primary way Bukele describes himself and his campaign is to say "I'm not them."    In other words, he spends much of his campaign rhetoric saying that he is not an old style Salvadoran politician, and he is a break from the ways of either the FMLN on the left or ARENA on the right.  Positioning himself this way has been very popular in El Salvador among a population which feels there has been little progress under governments run by either of the traditional parties.

You could see much of this on display in a recent forum held by the University of Central America (UCA).    The UCA has been holding a series of forums in which the four presidential tickets have been invited to come and explain their plans of government in response to questions from academic experts from the university.   You can watch the video of Bukele's appearance at the UCA  here.

Bukele, dressed in blue jeans and a leather jacket, was greeted with rapturous applause in an auditorium filled with young people.    When asked what his political party was, he stated "Nuevas Ideas" and stayed away from any link with the GANA party, despite being that party's nominee.  He instead focused on his story of a campaign by the existing political establishment to keep him off the ballot and the endorsement from the Salvadoran people when he gathered 200,000 signatures for registering his new party in only 40 hours.

Bukele's positions expressed at the UCA forum were decidedly middle of the road, however.    His security policy rests on pillars of prevention, combating crime, and rehabilitation and he supports the current government's "Yo Cambio" (I Change) program in prison.   He supports loosening abortion laws, but only to allow abortion to save the life of the mother.   He wants laws to protect the LGBT community from discrimination, but opposes same sex marriage.   He wants the rich to pay more in taxes and the poor to pay less.   He wants to eliminate corruption and tax evasion and says that will pay for his big programs.  He wants wastewater treatment plants for the big cities.  Curiously, he was completely unable to articulate any vision for reforming the country's inadequate education system for primary through secondary school.

The rather centrist views of Bukele are not what motivate his followers.   They are attracted by the brand and the image.  Bukele is young, he is cool, he is an outsider, and he states out loud what many have been feeling about El Salvador's politicians and political parties.

But as Salvadorans go to the polls in February, they should also remember the last time they fell in love with an outsider presidential candidate who was opportunistically nominated by an existing political party  (Mauricio Funes).    That did not turn out so well...

Don said…
You fail to mention Bukele's previous success as mayor of Nuevo Cuscatlan and San Salvador. Perhaps that success and Bukele's positions against STEALING GOVERNMENT MONEY affect Salvadorans. Or maybe it's like you say and all because Salvadorans think he is 'cool.' Lol who even uses the word cool in 2018. Que cool. Lol
12:02 PM

Don said…
Also, when all of the press is basically fox news on steroids what do you expect Bukele to do? He uses social media because that is the ONLY way to articulate a clear message that is not distorted by media companies who are cpntrolled by the right. Also Bukele avoids issues like abortion and gay marriage because the press is already bad enough for him.
12:06 PM

JOSEROBERTO said…
I was going to contribute to the comments, but Jefferson touched the same issues I was going to write about and I agree with him. There is only one thing I would like to add. Bukele was cornered by the CORRUPT establishment in the Government to enroll in the last party (GANA) that was available to run for President. He was right when he responded that his party is NI.
7:47 PM

Tony said…
I’m not sure how good your understanding of the Spanish language is, but, having listened to the entirety of the Bukele “Q & A” episode at the UCA, I thought his comprehensive response to the education issue was the highlight of the event. Really well worth getting it properly translated!
6:23 AM