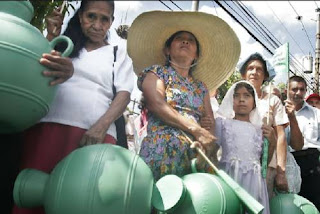 Heather Gies has written a really excellent overview of El Salvador's water crisis in National Geographic titled Once lush, El Salvador is dangerously close to running dry  Her opening paragraphs make clear why a comprehensive approach to water resources is so desperately needed:


In rural villages across El Salvador... more than 600,000 people have no access to drinking water, and hundreds of thousands more experience limited or intermittent access. Although Central America is rich in water resources, El Salvador’s small land area relative to its population size puts its thinning annual water supply per capita dangerously close to falling short of demand. Decades of failure to adequately regulate water use in the country have also opened the door to overexploitation and pollution, while fragmented water management has left services lacking.
...
The result is a multilayered crisis of water scarcity, contamination, and unequal access that affects a quarter of the country’s population of 6.4 million. As climate change threatens to tip what is by far the most water-stressed nation in Central America deeper into crisis, some say the outcome of the country’s polarising water management debate could be the lynchpin in the very viability of El Salvador’s future.

Make sure and read the entire article.

A possible water law addressing the crisis remains stuck in El Salvador's legislature.  Even though conservative parties have the votes to push through a pro-business version of the bill and overcome a presidential veto, they have not done so.   Civil society, from environmental groups to churches and universities, is solidly united against a bill which would give private business a decisive role in allocating water resources.  That opposition has so far induced the conservative parties to leave the draft bill in committee because of the political cost for advancing a bill labelled as "privatizing" the country's scarce water resource.