Oscar Romero: transformed by the reality before him 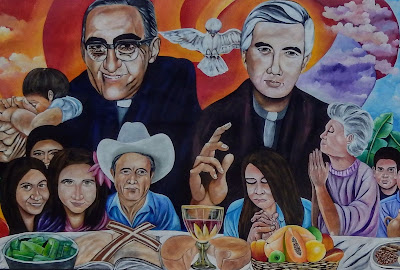 In many simplified accounts of the life of Oscar Romero, there is one central turning point event in his ministry. In these accounts, the murder of Jesuit priest Rutilio Grande in 1977 by a death squad opened the eyes of Romero to the social injustice around him. Typical of this narrative is an article by John Dear in the National Catholic Reporter in 2010. Dear writes:

Romero spent his years up until 1977 as a typical quiet, pious, conservative cleric. Indeed, as bishop, he sided with the greedy landlords, important power brokers, and violent death squads. When he became archbishop, the Jesuits at the Univeristy of Central America in San Salvador were crushed. They immediately wrote him off -- all but one, Rutilio Grande, who reached out to Romero in the weeks after his installation and urged him to learn from the poor and speak on their behalf.

Grande himself was a giant for social justice. He organized the rural poor in Aguilares, and paid for it with his life on March 12, 1977. Standing over Grande's dead body that night, Romero was transformed into one of the world's great champions for the poor and oppressed. From then on, he stood with the poor, and denounced every act of violence, injustice and war. He became a fiery prophet of justice and peace, "the voice of the voiceless," and in Jon Sobrino's words, "a new Jeremiah." (italics mine).

An article which appears today in the National Catholic Reporter titled Archbishop Óscar Romero: setting the record straight written by my friend, the  journalist Gene Palumbo, shows that these accounts of a dramatic conversion of Romero prompted by Rutilio Grande's murder are overly simplistic and inaccurate:

Romero had changed during an extended stay, in the mid-'70s, far from the capital city. In the early '70s, as an auxiliary bishop in San Salvador, he was seen as highly conservative; that was the period when he drew the ire of the priests who were so upset by the news of his appointment as archbishop. But in 1974, he was named bishop of the rural diocese of Santiago de María. There, he drew close to farmworkers and catechists who were targeted by the military. What he saw led him to a major shift in outlook.

Palumbo cites a conversation that Romero had with Jesuit priest César Jerez:

It's just that we all have our roots, you know … I was born into a poor family. I've suffered hunger. I know what it's like to work from the time you're a little kid … When I went to seminary and started my studies, and they sent me to finish studying here in Rome, I spent years and years absorbed in my books, and I started to forget where I came from. I started creating another world. When I went back to El Salvador, they made me the bishop's secretary in San Miguel. I was a parish priest there for 23 years, but I was still buried in paperwork … Then they sent me to Santiago de María, and I ran into extreme poverty again. Those children that were dying just because of the water they were drinking, those campesinos killing themselves in the harvests … You know, Father, when a piece of charcoal has already been lit once, you don't have to blow on it much to get it to flame up again … So yes, I changed. But I also came back home again.

There is much more in the article about the sources of Romero's strength and commitment to social justice. That commitment would lead to his martyrdom and the people of El Salvador proclaiming him "San Romero de América", a recognition which the Catholic church finally makes official this weekend.
Oscar Romero Rutilio Grande