Why arrests of supposed gang members do not signify successes 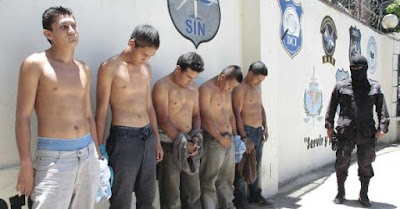 The Attorney General's office (FGR) and National Civilian Police (PNC) in El Salvador regularly (like every day) parade in front of the cameras alleged gang members they have arrested.   And it is a major media show when there are periodic nationwide raids which pick up hundreds of accused young men.

Yet columnist Paolo Luers recently wrote about the key fact you need to know about these public arrests:

Most of you are not going to like this letter. But someone has to tell you: If you think that the industrial quantity of captures produced and publicized by the prosecutors and the PNC is an indicator that we will have more security, you were deceived.

The Prosecutor's Office announced that it issued 1128 arrest warrants against persons accused of being members of the MS13 or of the gang 18. The result: 607 arrests. It is not the summary of a month, it is the summary of a single week, between August 26 and September 4, 2018, sum of three mega raids: the operations  “Arpón del Pacífico”, “Libertad”  and "Tsunami", that you have seen in the news.

Of these hundreds of detainees that the PNC has paraded for the media to take pictures of, how many are really criminals? How many would end up condemned? If we apply the sad statistics of our police and judicial system, maybe 10%.

And the others? They now have been entered as the statistics of "successes" of FGR and PNC. But they are the opposite: part of the sad statistic of thousands of people who spend months in provisional detention, filling and saturating the local jails and the prisons, and against whom in the end there is no evidence. (translation mine).

This gets to the heart of a central problem in the justice system in El Salvador.   Criminal investigations and prosecutions in the country last months and years, yet rarely result in convictions.   So that means two things -- the guilty are often set free and crimes are often never solved.   But it also means that innocent people, especially young men, are rounded up and end in the hellish conditions of Salvadoran jails and prisons for months and years.

Release prior to trial, whether on bail or house arrest or some other condition, is the exception rather than the rule in El Salvador.   As of July 2018, according to data from the World Prison Brief, almost 30% of the inmates in Salvadoran prisons are there pre-trial.

El Salvador needs swift and effective justice if it is to deal with its ongoing problems of crime and violence.  Today Salvadoran justice is neither.