September 05, 2018
A proposed law was introduced in August  in El Salvador's National Assembly to provide programs in schools concerning responsible sexuality and self-worth in order to combat the problem of teen pregnancy in the county.  The draft law defined the programs' scope as dealing with biological, psychological, social, emotional and ethical issues of sexuality within a framework of human rights, prioritizing the elimination of the culture of violence.  El Salvador's legislators quickly tabled the proposed law   That was a mistake.

On average, 69 girls or adolescents became pregnant per day in 2015, or one pregnant minor every 21 minutes.  According to the 2015 Map of Pregnancies of Girls and Adolescents in El Salvador, La Paz, La Unión and Cuscatlán were the departments with the highest rates of teen pregnancies. 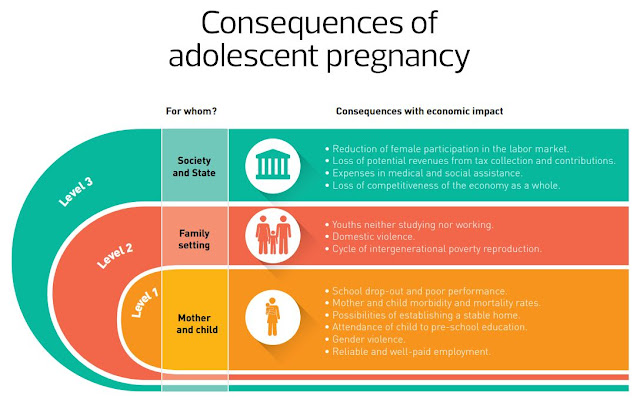 According to the United Nations Population Fund, in 2015, 25,584 girls and adolescents became pregnant in El Salvador, and only 2,231 of them continued with their schooling after their pregnancy.  It is the leading cause of school drop-outs among girls.  Girls who leave school to have babies will likely face, along with their children, a life of poverty.   The average monthly earnings for a girl who drops out are only $134.74, while a woman who completes twelve years of schooling averages three times as much.

Despite the clear costs of teen pregnancy, La Prensa Grafica reports that only 3500 of the country's 45,000 teachers in public schools have received  the basic training course in Holistic Education for Sexuality offered by the Ministry of Education.  Only 27% of schools have any plans for sexuality related education.  There will be no improvement after the National Assembly in August  failed to take up the proposed law for responsible sexuality programs.   Fear of conservative religious and cultural groups prevented movement on this important proposal

Providing quality information to girls, not only about the biology of sex and reproduction, but about the emotional, social and practical aspects of pregnancy, contraception, relationships and child-rearing advances many goals.  Programs which equip and empower young women with the capacity and power to make decision over their own lives, bodies, sexuality and futures are needed.   Such programs pay off in reductions in teen pregnancy, maternal mortality, child poverty, and domestic violence, and improve gender equity and the empowerment of women.

Passage of a law alone is no silver bullet.   All adults responsible for the upbringing of girls -- families, churches, schools, the healthcare community -- need to ensure that principles and practicalities of responsible sexuality are shared with girls.   And while they are at it, boys need to be taught corresponding principles of respect and responsibility.
Children Education Healthcare Poverty Women's Rights