September 07, 2018
Every election season in El Salvador I have to laugh.   The country's electoral code prohibits campaigning too far in advance of the election date.  Candidates cannot campaign more than four months before the presidential election, and no more than two months before the election of legislative deputies and mayors.  But this has never stopped anyone as far as I can tell.

For the upcoming presidential elections on February 3, 2019, campaigning should not start until the first week of October.   But here is ARENA candidate Carlos Calleja this week: 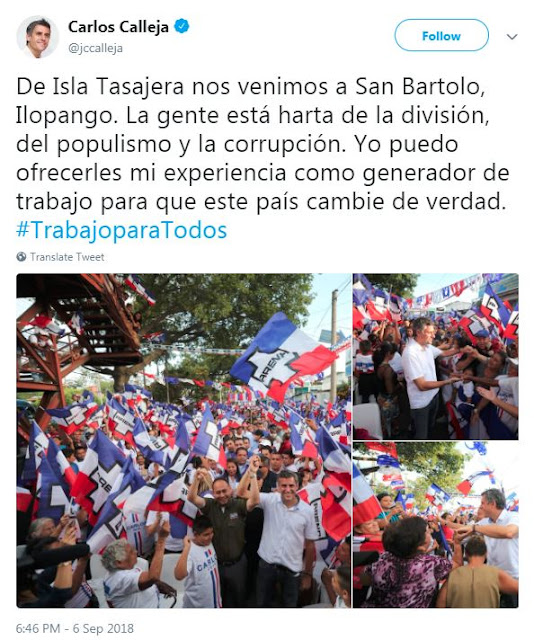 From Tasajera Island we come to San Bartolo, Ilopongo.  People are fed up with division, populism and corruption.  I can offer you my experience as a generator of jobs, so that this country will truly change.

Nayib Bukele ostensibly has told the GANA party that he will not campaign before October and so has not had big rallies since he became their nominee.  But his campaign is very active online.   For example, he is releasing his proposals one by one on his Facebook page, like this proposal to build a new international airport in the eastern part of the country:

And every election, someone files a complaint against candidates for early campaigning.  Frankly, what's the harm?  Let them all campaign.

I bet you're not indifferent or cynical about democracy in the US -- why be that way about El Salvador?

Tim said…
Not sure what you are saying. I am not indifferent. I say that more campaigning is good for Salvadoran democracy. What is bad is having a law that everyone ignores. Just repeal the law.
5:25 PM

David said…
I don't think the solution is "repeal the law". I think you strive to enforce the law, or create better laws and better enforcement. Free-for-all is not the answer. This is a basic tenet of political finance reform.

"Transparent and accountable systems of political finance that enhance the integrity of the political process and ensure a level playing field for parties and candidates are important for emerging, consolidating, and established democracies. Clearly defined and enforced regulations may reduce competitive advantages for wealthier candidates, quell vote buying and the abuse of state resources, and increase public confidence in the political system."
https://www.ifes.org/issues/political-finance
11:50 PM