A critical moment for water rights in El Salvador 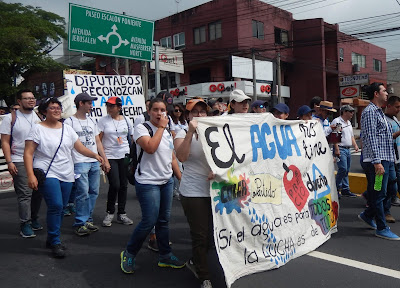 It feels like the movement towards a water law is reaching a critical moment in El Salvador. After the March 4, 2018 national elections, conservative parties have a stronger position in the legislature, but this has motivated an equally strong response from civil society.

Groups coming together under the umbrella of the National Alliance against Privatization of Water demand recognition of water as a public good and a fundamental human right to be administered and protected by the State. In such administration, there must be citizen participation. Water resource management must holistically focus on entire watersheds.  They have submitted to the National Assembly a proposed "General Water Law" to accomplish these goals. 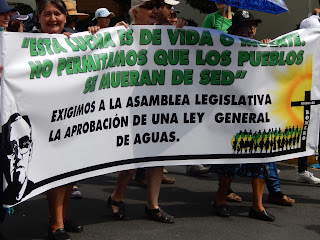 Andrés McKinley is a water and mining specialist at the José Simeón Cañas Central American University (UCA) and writes:

To protect the business interests of its membership, [the National Association of Private Business] ANEP has insisted on private sector control of any institutional structure which might emerge for the management of water resources in El Salvador. This has been a key obstacle in the effort to build good governance in the water sector over the past 12 years. As an alternative, a broad-based National Alliance Against the Privatization of Water, the National Water Forum, environmental groups, local water boards, the Catholic Church, the Jesuit-run Central American University José Simeón Cañas (UCA), protestant churches, the National University, the Office of the Human Rights Ombudsperson, and other key actors, argue that it would be illogical to put water in the hands of those who have contributed so much to the current crisis and insist that the regulation of water resources should be in the hands of the State (central government)….

The debate on water in El Salvador is at a definitive moment, influenced by a complexity of economic, social, political, environmental, party and electoral interests. It is time now to recognize, in the highly polarized political environment of the country, that this issue, for El Salvador, is a national issue, of life and death, challenging us to find a new way of doing politics, to seek a more honest dialogue based on facts and realities, and to achieve consensus focused on the common good.

Religious leaders in the country have been taking a prominent role in the water movement in recent weeks. On August 21, the Roman Catholic archbishop, along with top leaders from the Lutheran, Anglican, and Baptist churches issued a strong joint statement in favor of the General Water Law.

This Thursday, those leaders will march along with the National Alliance against Privatization from the Metropolitan Cathedral in San Salvador to the National Assembly to deliver tens of thousands of signatures on petitions demanding approval of the General Water Law. To make it clear that this is not a partisan exercise in an election year, the archbishop advised legislators on Sunday that these petition signatures are being delivered to the National Assembly as a body, not to the legislators of any particular political party. If some deputies come out to receive the signatures separately, they will not be delivered to them.

Activities promoted by faith based organizations, civil society, universities and other groups continue throughout the country. For example, in an event I attended on Saturday, the elected deputies of the department of La Paz were summoned to a forum organized by social action committees of local Catholic parishes in the department. Three deputies arrived, two from ARENA and one from the FMLN, but the GANA deputy was nowhere to be found. The assembled community members took to the podium to describe their opposition to laws which did not recognize water as a human right and would let private interests determine the allocation of water resources. After listening to these demands, the deputies signed a commitment to meet again with the assembled groups in sixty days to explain what work they had done in the legislature on behalf of water rights. 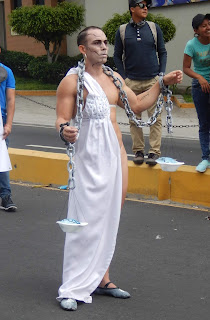