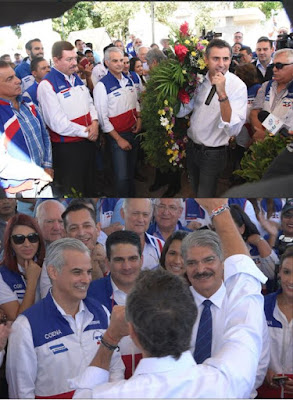 Yesterday, would have been the 75th birthday of former Salvadoran major Roberto D'Aubuisson, leader of death and torture squads, giver of the order to assassinate Oscar Romero, and founder of the right wing ARENA party.    Party leaders, including their presidential candidate Carlos Calleja and Norman Quijano, president of the National Assembly,  gathered at D'Aubuisson's grave to celebrate their former leader.

In El Salvador, the leaders of ARENA still call it "fake news" that their founder was the intellectual author of Romero's martyrdom.  Responding to a reporter, Carlos Calleja said it was "total speculation" that D'Aubuisson was behind the murder of Romero:


In rebuttal, I share what international commissions and courts have found after hearing the evidence concerning D'Aubuisson:


Former Major Roberto D'Aubuisson gave the order to assassinate Archbishop [Oscar Romero] and gave precise instructions to members of his security service, acting as a 'death squad', to organize and supervise the assassination.


From Madness to Hope, Report of the UN Truth Commission on El Salvador, 1993.

The IACHR has established that the decision to execute the Archbishop of San Salvador was made by Major Roberto D'Aubuisson; that Captains Alvaro Saravia and Eduardo Avila and civilians Eduardo Sagrera and Mario Molina actively participated in planning the execution; and that Walter Antonio "Musa" Alvarez and Captain Saravia were implicated in the payment made to the gunman...

Major D'Aubuisson took credit in very closed circles for having planned the assassination of the Archbishop of San Salvador and was accused by witness Amado Antonio Garay of masterminding that extrajudicial execution. D'Aubuisson was also incriminated by the "Saravia Diary" and other documents found and seized on May 7, 1980.

Ruling of the Inter American Commission on Human Rights in the case of Monsignor Oscar Arnulfo Romero y Galdamez, April 13, 2000

D’Aubuisson began organizing death squads as early as 1977, but intensified his efforts after the coup.  The group of military officers he led performed widespread and brutal abductions throughout the late 1970s and early 1980s....

On March 24, 1980, Major D’Aubuisson, Saravia and others gathered at the home of a D’Aubuisson supporter in San Salvador.   The group had knowledge that Archbishop Romero would celebrate a mass that day.   A member of the group proposed tha this provided a good opportunity to carry out the already approved assassination  D’Aubuisson agreed, and the group began to make arrangements.

And the die-hard FMLN membership still honors Joaquin Villalobos, alleged to have ordered the murder of Roque Dalton, poet and revolutionary...

Indeed there is enough guilt to go around several times over.