July 20, 2018
July 15 marked the end of the term for 5 members of El Salvador's Supreme Court and their back-ups (suplentes).   This includes four of the five members of the most important body on the court, the Constitutional Chamber.

Despite the end of the term, El Salvador's National Assembly has so far failed to elect their replacements.

The National Assembly is choosing from a list of 30 candidates provided by the national bar associations and the national judicial council.   The parties have publicly listed their top candidates, and only a few candidates initially have sufficient support across more than one party to achieve the 56 vote super-majority needed to be elected by the 84 member legislature.

The following chart prepared by the independent Social Initiative for Democracy ("ISD" for its initials in Spanish) provides a score card for those who are playing along: 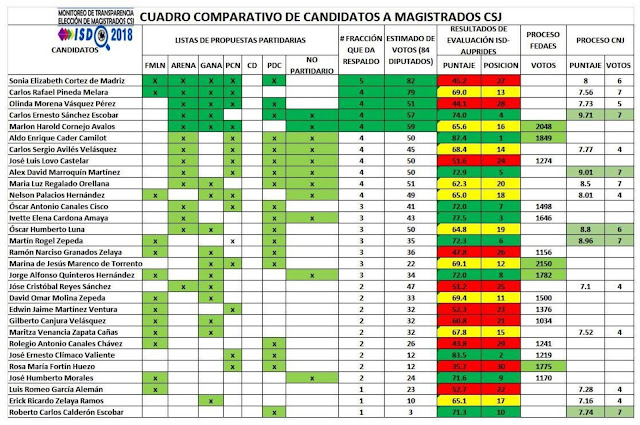 A recent La Prensa Grafica article makes the basic point with the title Los candidatos a magistrado con más apoyo son los que más dudas generan (The candidates for magistrate with the most support are those who generate the most doubts).

Questions have been raised about candidates with multiple complaints against them filed with the Human Rights Ombudsman, about their performance in public office, about their conflicts of interest, or about their lack of experience in constitutional law.   And with those doubts, civil society is nervous about back room bargains being cut.  El Salvador's political parties are open in acknowledging that they are negotiating with each other over the election of these judges.