In recent years, El Salvador's coffee production was hit hard by a fungus known as "roya" which decreased the coffee harvest by as much as 60% in the country.   This blow to the coffee sector cost tens of thousands of jobs in the small country.

This chart using data at the International Coffee Organization shows the steep drop off in Salvadoran coffee production starting in 2012: 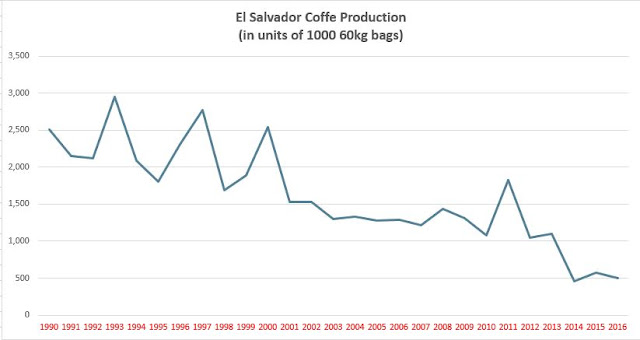 Now Reuters reports on how many farmers are turning to higher quality beans, which require more intensive care but also fetch a higher price in world markets:


Farmers in the Central American country have turned to specialty coffee trees - identified by fanciful names such as bourbon, geisha and pacas - in hopes of reviving a local industry devastated by crop disease just a few years ago.

The trees produce some of the world’s highest quality coffee, beans with distinctive tastes prized by consumers in the United States and elsewhere who are willing to pay up for top-drawer coffee. Specialty coffee can earn farmers more than twice what they make selling standard varieties.

The result is that El Salvador, though a small producer by size, has one of the world’s most diverse coffee crops. This year, El Salvador harvested about 740,000 bags, roughly 1 percent of what Brazil, the world’s biggest producer, will produce.

But specialty coffee accounts for a rapidly increasing share of its production, giving it an outsized role in the high-end coffee market. Last year, specialty coffee made up about 65 percent of its exports, a figure expected to rise to 80 percent by 2025, according to Salvadoran Coffee Council data.

Read the rest of the Reuters report here.

While diversifying the coffee crop seems like a good practice, even more important is El Salvador's need to diversify away from reliance on the export cash crops of sugar cane and coffee.   The country's agricultural sector needs a greater variety of cash crops, supported by modern techniques and organic practices which don't deplete the soil, rather than relying on mono-culture plantations supported by agro-chemicals and resource-intensive methods.