June 23, 2018
News coverage of family/child separation at the US border has dominated headlines in the US and El Salvador for the past two weeks.   In such coverage, the countries of the Northern Triangle of Central America -- Guatemala, Honduras and El Salvador are usually lumped together as the home countries of the great majority of these migrants.    What you will not learn from that coverage is that migration from El Salvador has dropped significantly, while migration from both Honduras and Guatemala has increased significantly in the past year.   Migration as measured by detentions by US authorities at the border has decreased at a rate of almost 50% for Salvadorans from last year while border crossing by Guatemalans and Hondurans has increased 80% and 46% respectively: 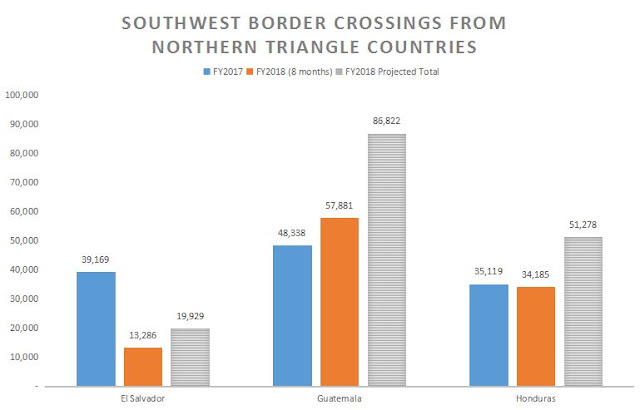 The chart includes apprehensions of unaccompanied minors and families travelling with children who crossed away from ports of entry as well as inadmissibles (asylum seekers) presenting selves at ports of entry.

The underlying data is set out in the following table: 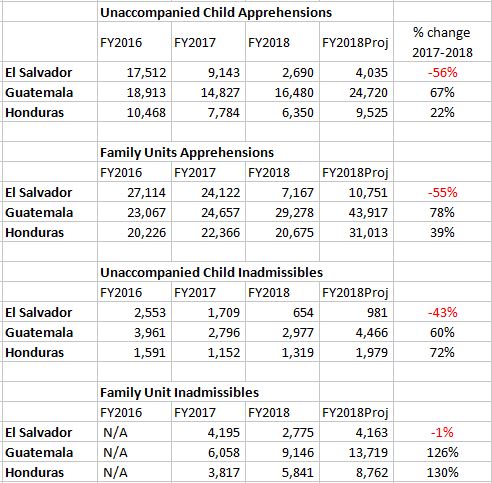 A comprehensive report on migrant flows fin North and Central America during the first months of 2018 was recently released by the regional office of the International Organization for Migration.   The same patterns were seen in detentions by Mexican authorities of Central Americans crossing Mexico:

My theory is that possible migrants in El Salvador are much more impacted by the so-called "Trump effect" than are Guatemalans and Hondurans.   A much greater percentage of native born Salvadorans live in the US (24.5%) than those persons born in Guatemala (7.3%) or Honduras (9.6%).   So a Salvadoran will almost certainly have relatives or friends in the US reporting back on the fears and hardships of the immigrant community living under Trump, while in Guatemala or Honduras, people are less likely to have these direct reports from people they know.